Home>News>Archive>OPTY – yacht which sailed around the world 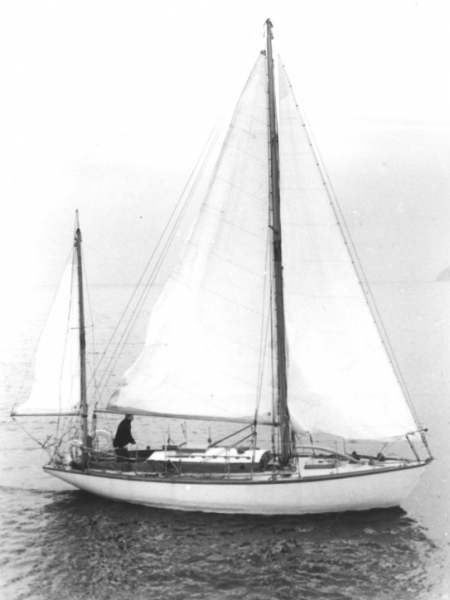 OPTY – yacht which sailed around the world

A solitary cruise, a murderous struggle against time and illness, an obsession to sail round the world without any help or support, with only a yacht and oneself to rely on. Leonid Teliga is still recognized as a symbol of a romantic struggle and an extraordinary sea adventure. Few sailors, before or after Teliga, managed to achieve as much – to fully devote their lives to sailing.

The beginnings
Leonid Teliga was born on 21st May 1917 in Vyazma, Russia, but spent his childhood and youth in Grodzisk Mazowiecki. Inspired by books by Wagner and Zaruski, he dreamt of sea voyages. He wanted to study medicine but joined a military school for officers instead. Teliga spent his first officer’s leave working as a fisherman on a cutter – he already knew that sailing was destined for him. After the Second World War (during which Teliga served as a Polish Army infantry officer in the Second Polish Republic and a pilot of the Polish Air Force in Great Britain), he worked as a government official and a deep-sea fisherman, participated in UN Commission works in Korea and Laos and worked as a correspondent of the Polish Press Agency in Rome.

Tuńczyk type yacht, called OPTY
While Teliga was working as a sailing instructor at youth camps, his idée fixe of the round-the-world voyage was becoming more and more realistic. The sailor devoted a long time to plan a single-handed cruise. Financing the project from his personal savings, he built a yacht (based on a Tuńczyk [Tuna] type construction by Leon Tumiłowicz, Eng.) which was aimed to sail around the globe. Equipping the vessel proved to be a complicated task: Teliga had no funds, and basic materials such as wood, ropes, navigation gear were difficult to find for a sailor who was planning a single-handed voyage around the world on a private yacht. The news of a solitary enthusiast planning such a bold undertaking drew public attention. As a result, the crew of ŚMIAŁY passed maps to Teliga, Capt. Ludomir Mączka lent him a chronometer, “Rejsy” club granted him with a maritime code signal flag set. Moreover, “Społem” and “Las” cooperatives took care of provisioning, while the Polish Navy supplied the sailor with a medical kit.

Mahogany planking and three berths
In November 1966, OPTY was entered into the ship registry under the number of ROG 1374. This 9.85 metre yacht had a 2,75 metre breadth, 1,56 metre draught, 5 tonne displacement, and a 43 square metre sail area. The yacht had a conventional hull construction: a wooden framework with a mahogany planking. OPTY’s interior was finished also in mahogany and mahogany plywood, equipped with 3 berths, a foldable table, a kitchen table with a unit and a navigation table. The masts were glued and made of pinewood and the rudder was oaken. The yacht was equipped with basic sails: a mainsail, foresail and a mizzen, two sets (polyester and cotton), storm sails – a mizzen, trysail and a foresail, as well as light sails such as a Genoa jib, foresail, spinnaker, two parachute spinnakers and working sails such as a mainsail and a foresail. An auxiliary drive was supplied by a Volvo Penta DM 5 KM engine. OPTY was not equipped with a radio – in case of any danger the sailor had no possibility of calling for help.

Late start
Teliga waited another two years before setting off. On 8th December 1966, the yacht was decided to be shipped to Casablanca on board SŁUPSK vessel. The first part of the voyage to the Canary Islands provided an overview of the conditions which accompanied OPTY in the course of the whole cruise. Teliga himself was feeling ill: wrongly diagnosed lumbago two years later turned out to be a malignant tumour. Constant storms followed by calms, struggle of hull against waves, problems with the engine and a leaking superstructure soon became key elements of the voyage.

More problems
Apart from problems with equipment, Teliga being a sailor from the Communist bloc faced complications while crossing the Panama Canal. It took him 11 days to negotiate a consent for OPTY to reach the shore. Another noticeable problem was lack of self-steering gear. A three-month stop in Tahiti, which OPTY reached on the New Year’s Eve of 1967, was devoted to repair and conservation works. OPTY’s fabric planking damaged by shipworms was carefully mended and painted. In addition, Teliga started construction of self-steering gear based on his own design.

Birthday celebration at antimeridian
On her May route from Bora Bora, OPTY crossed the antimeridian of Warsaw, and Teliga celebrated his 51st birthday. Strong winds made it possible for OPTY to cover record distances of around 160 miles per day. In Fiji, the engine was repaired and the mahogany hull was protected against shipworms. Provisioning and water supplies collected during the stop were planned to be sufficient for the longest part of Teliga’s cruise.

Single-handed sailor’s club
After a month-long sail, OPTY reached the Indian Ocean and the struggle against capricious winds was about to begin. “The winds began to blow from different directions. (…) Sometimes, they were just enough to fill the sails and then again forced me to take down the last piece of sailcloth and to disassemble the flap of self-steering gear,” wrote Teliga in his diary. In the Northern Hemisphere, on the last day of the year OPTY faced a strong hurricane which damaged the mizzenmast. Cut into pieces, the mast ended up in the water and on 9th January 1969, the yacht reached Dakar in Senegal as a sloop. It took Teliga 165 days to cover the distance of this single ‘leap’ measuring 13,260 miles to the port in Dakar. This way, he broke the record of the longest uninterrupted single-handed oceanic sailing time held for the previous 85 years by Bernard Gilboy from USA, who covered 6,000 miles in 163 days. The whole cruise made Teliga join the list of just over a dozen single-handed yachtsmen who sailed round the world on a yacht.

Round trip
Teliga faced the penultimate stage of his voyage setting off to the Canary Islands. On 5th April 1969 at 11:15 a.m. Greenwich time and at 23°25’°W 23°56’°N, OPTY reached her position from two years before and thus completed the round-the-world loop. The cruise lasted two years, thirteen days, 21 hours and 35 minutes. The last days of the voyage were marked by intensifying health problems which were about to reach their climax. Struggling against pain, Teliga reached the Canary Islands on 16th April 1969 and set off to Casablanca, the last stage of the voyage, without any further delay. On 29th April 1969, OPTY berthed by the Polish vessel SANDOMIERZ. The next day, in the presence of Polish diplomats and representatives of the Moroccan authorities, the voyage was officially recognized as completed. Teliga underwent immediate medical tests in Casablanca. He came back to Poland by plane and was taken to hospital straight from the airport in Okęcie. A surgery confirmed the diagnosis: a tumour, concealed for many years, had to be treated immediately in hospital conditions, which in turn made an earlier return of the yacht to Gdynia impossible. OPTY returned to Poland on board ORŁOWO vessel on 13th June 1969.

The last stage
Convalescence and treatments brought hope for Teliga’s return to good health. His achievement drew a lot of public attention, however it proved difficult for the government authorities to make Teliga their mascot. Teliga did not fancy festive ceremonies, felt ill, accepted distinctions, gave interviews, however he felt truly passionate only about participation in meetings with enthusiasts of sailing. As if Teliga knew he was running out of time, he finished writing short accounts entitled “OPTY from Gdynia to Fiji” and “OPTY from Fiji to Casablanca”. Works on preparation of materials for the book were terminated by his death. Leonid Teliga died on 21st May 1970, less than a year after his historic cruise. Stanisław Teliga, the author’s older brother, prepared publication of the sailor’s account of the lifetime voyage entitled “The Solitary Cruise of Opty”.

OPTY
While raising funds for the construction of his yacht, Leonid Teliga used to say: “If I manage to build this yacht, I will call her OPTY-mista [OPTI-mist], if not, I will be happy with a kayak called PESY-mista [PESSI-mist] on board which I can sail on Masurian lakes.” OPTY managed to complete a round-the-world cruise, however it is difficult to consider her a lucky yacht which made a lifelong dream come true. Marked by Teliga’s illness, she was pushed to her limits, and came back to Poland with a broken mast on board a different vessel.

From a boathouse to the Shipwreck Conservation Centre
In the 1970’s, the yacht was used by the Maritime School in Gdynia. In 1979, she was handed over to the Polish Maritime Museum in Gdańsk. OPTY was exhibited in front of the Gdańsk Crane for 6 years before she was transported to a boathouse of the Academic Yacht Club in Górki Zachodnie in 1985. After a decade, the yacht was transferred to the Vistula River Museum where she stayed for nearly 20 years. In the meantime, in 2013 OPTY was opened for visitors in the yacht club “Gryf” in Gdynia for a period of five months. Today, OPTY is recovering her original shape in the workshop of Complex Jacht in Puck. The restored yacht will constitute an important part of a permanent exhibition of the Shipwreck Conservation Centre with Studio Warehouse in Tczew, which is currently under construction. She will be placed next to “Dal” – a different yacht whose owners were also devoted to their passion for conquering the sea and overcoming personal weaknesses. 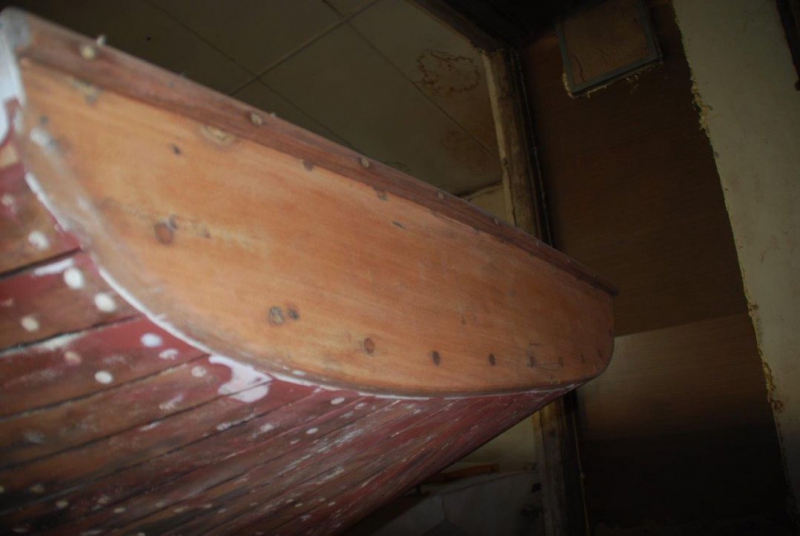 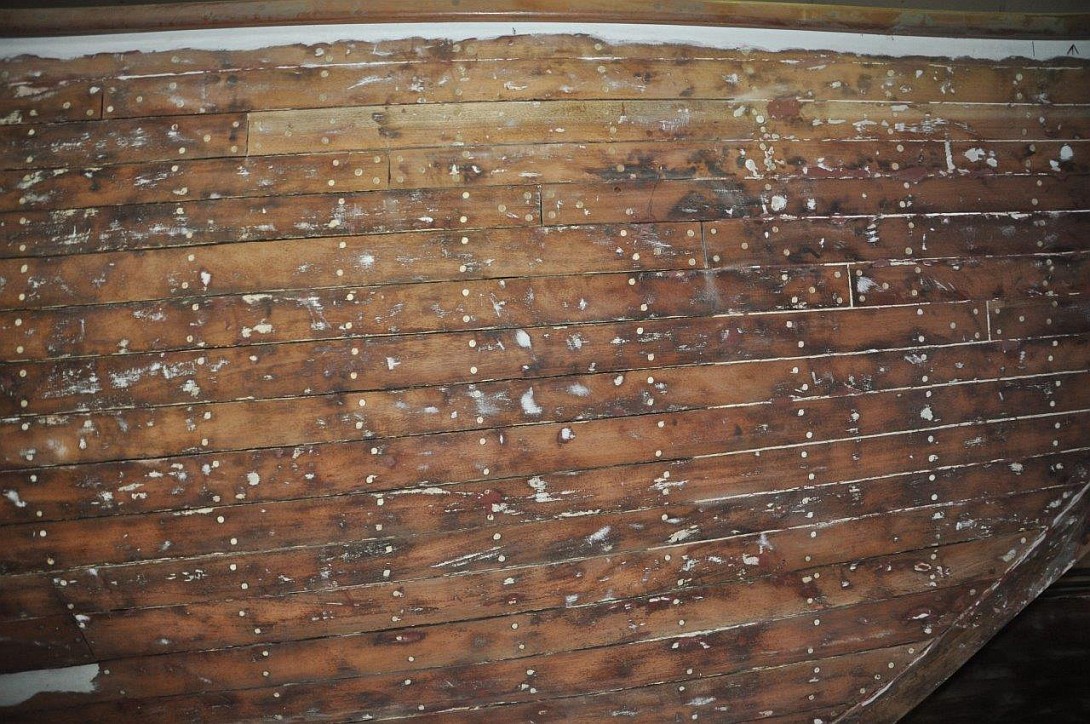 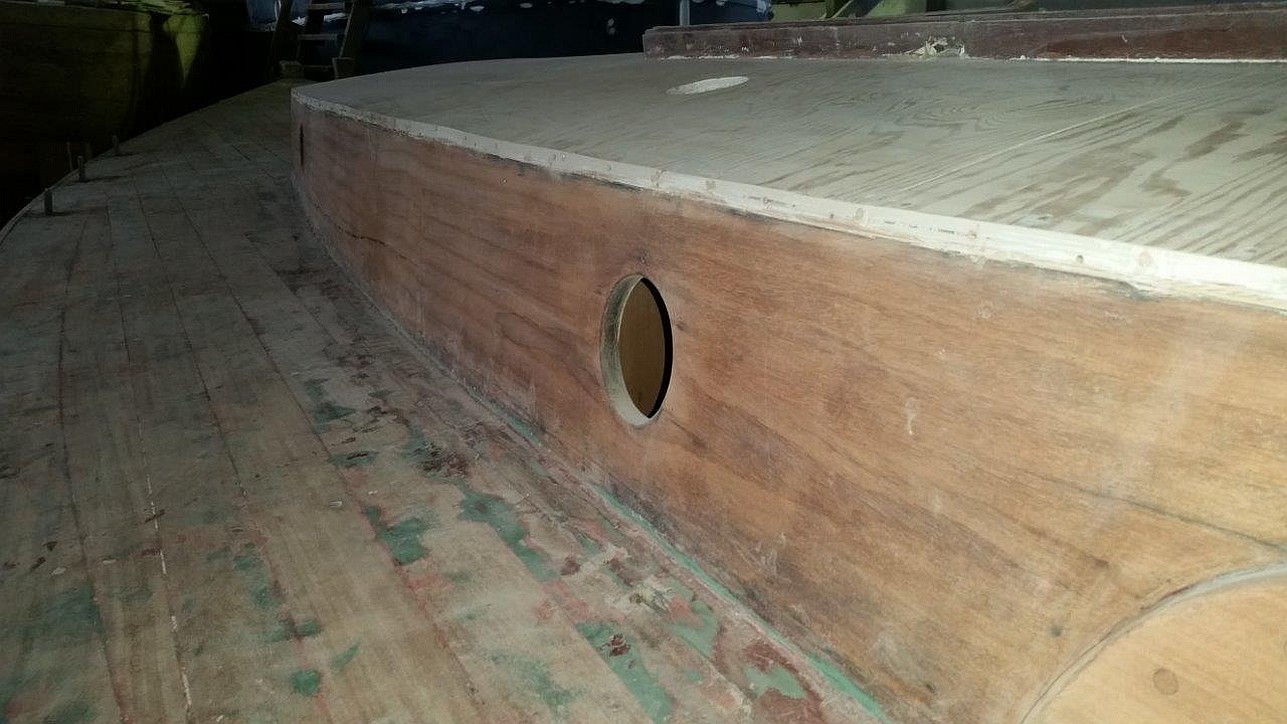 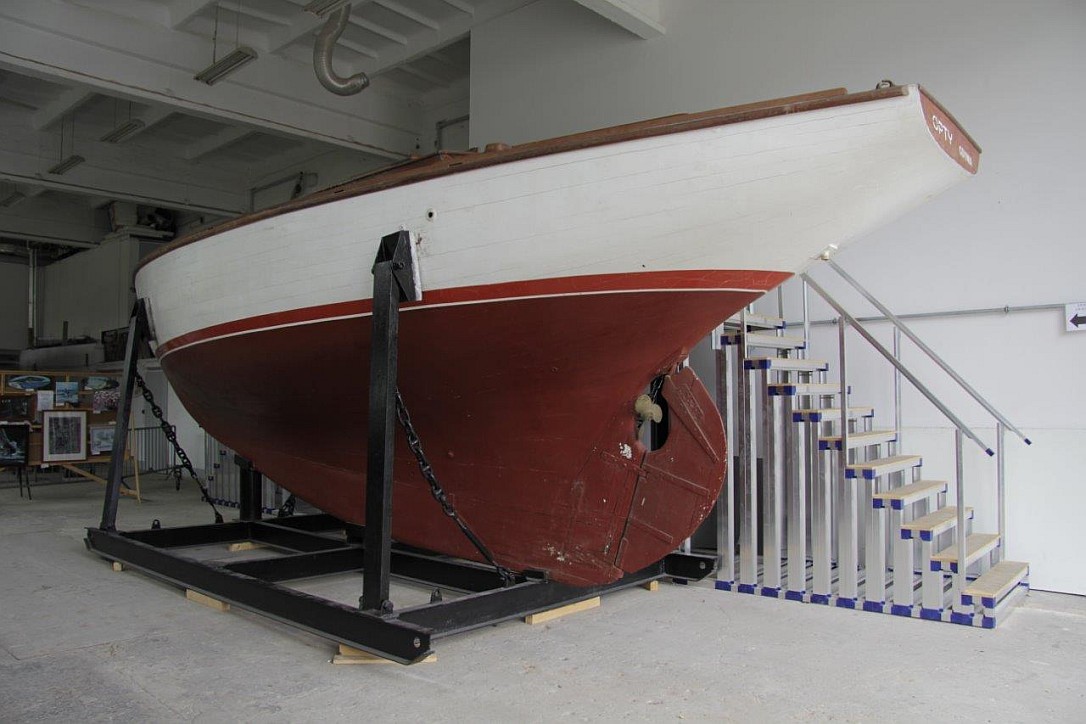 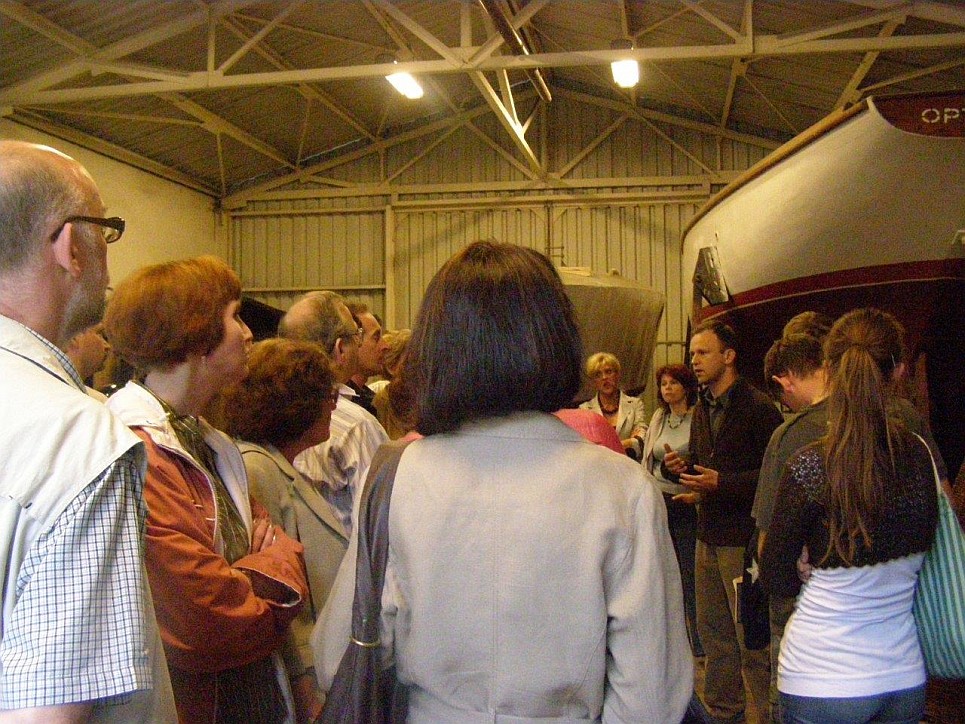 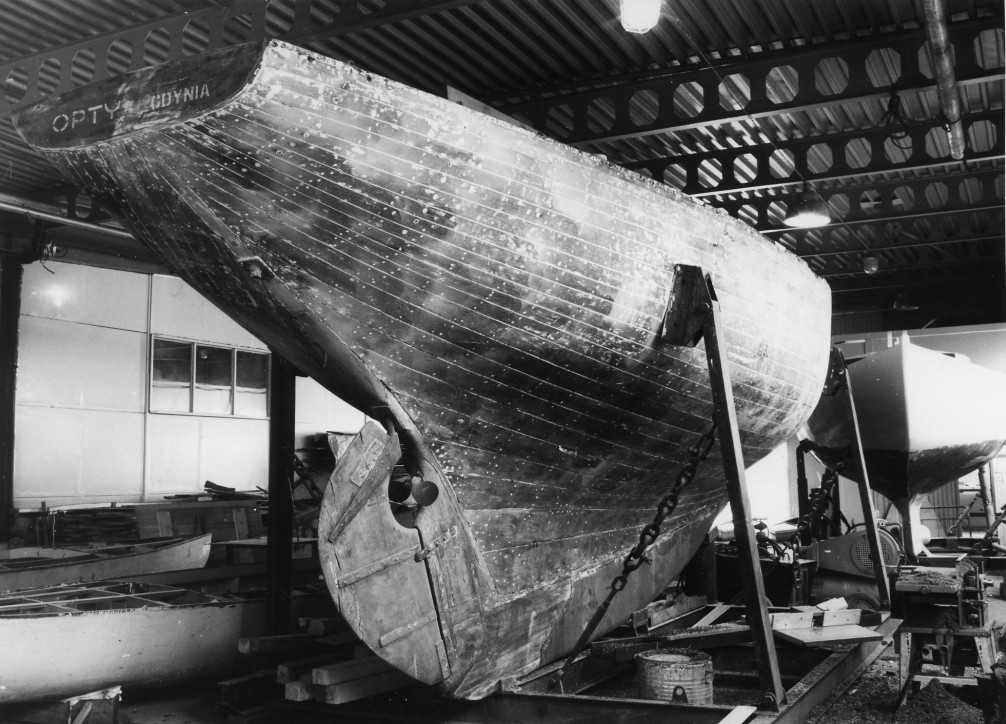 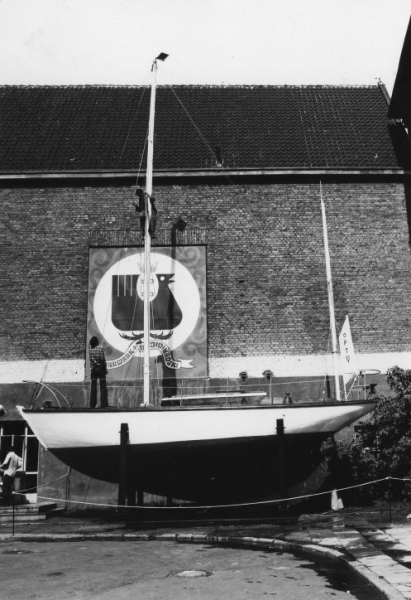 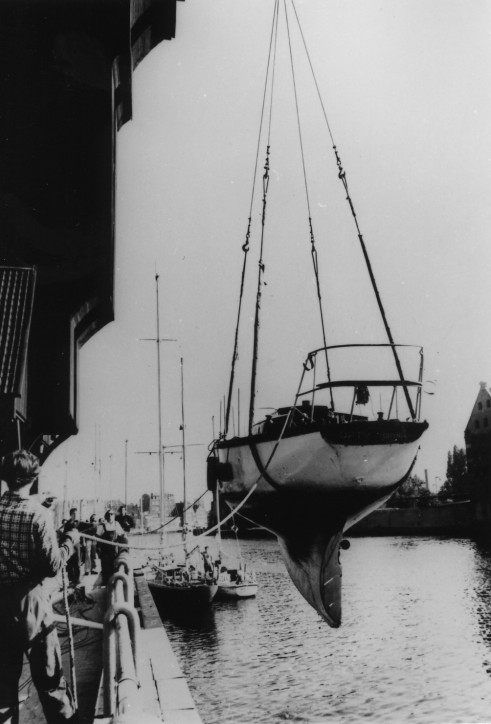 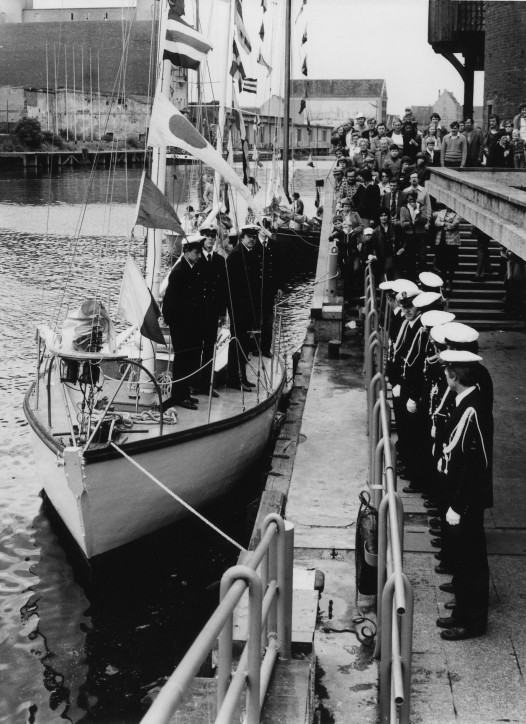 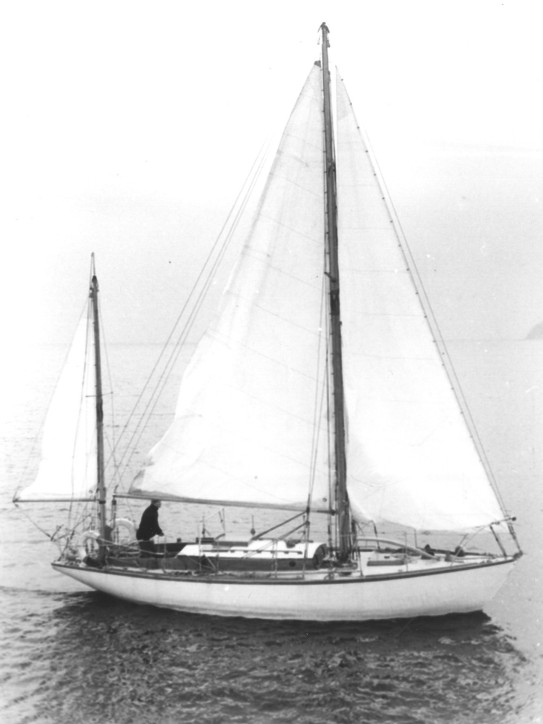