→ National Maritime Museum kindly informs that the Granaries on Ołowianka Island and the museum ship "Sołdek" will be closed on December 3rd, 2021
→ The Crane remains closed to visitors due to renovations
→ Museum ship "Dar Pomorza" is closed from 2.11.2021 due to the winter season
→ Restrictions and limitations inside the branches of the National Maritime Museum in Gdańsk - read

The majority of granaries in Gdańsk were destroyed as a result of war actions in 1945. The walls of three of them were preserved on Ołowianka and after reconstruction in 1985 they became the main exhibition area for National Maritime Museum. The oldest one is the Gothic granary “Oliwski”, after 1677 called “Klasztorny” (Closter). Its name derives from the Cistercian Order from Oliwa. The Baroque granary “Panna” (Maiden) was named after a sculpture standing once on its top (first mentioned in 1709), and it was built in place of an older medieval granary, “Szkarpawski”. “Miedź” (Copper) granary’s name obviously comes from the type of good once stored there. There used to be a wooden or stone-carved plaque on the front of each granary specifying its name. Two plaques on the “Oliwski” granary have been preserved with the dates 1677 and 1738.

History of Ołowianka Island
The life of the medieval Gdańsk port focused on the left side of the Motława river. The city gates were situated there and in their vicinity wooden bridges and reloading facilities were erected. The space in between was fortified and it never had trade functions. Constant development of the port required the construction of new storage buildings and reloading quays on the opposite bank of the river.

The island on the Motława river became an important part of the inner port; it was where the Teutonic Order’s commanders organised a very well functioning harbour in the times of Teutonic rule in Gdańsk. The island is situated opposite the Żuraw and was linked to the left bank with a wooden bridge (close to today’s Rycerska street). In the 15th century, during further development of the port infrastructure, on the part of the island called Szafarnia1 (Stewards – this part belonged to the Teutonic stewards2 directly opposite the Teutonic Castle) reloading equipment and storage facilities were built. The main goods stored here were grain, salt, iron, anchors, and millstones. Linen, spices and tropical fruits were stored separately. There were also carpenter workshops on the island.

Trade growth in the 16th and 17th centuries resulted in port expansion. Its natural centre was on the Wyspa Spichrzów (Granaries Island) with its storage buildings. The medieval Szafarnia after moving there in 1597 the lead store (Ołowiowy Dwór – Lead Court) was named Ołowianka (Lead Island). The group of islands consisted also of Cieślarnia (eastern island) with a timber store and Kępa (northern island). The historical sources claim that in 1643 on Ołowianka Island there were seven granaries out of a total of 315 in the port of Gdańsk. There must have been a ferry connection between Żuraw and Ołowianka since 1687. The island was connected with today’s Szafarnia street by a drawbridge constructed near Angielska Grobla (English Weir). On top of it, between Ołowianka’s northern end and the left bank of Motława there was a pole marking the borders of the inner port designated for reloading of goods.

Szafarz (Steward) – Teutonic officer in charge of local and international trade. Lower rank officers making purchases and sales had to report to him. 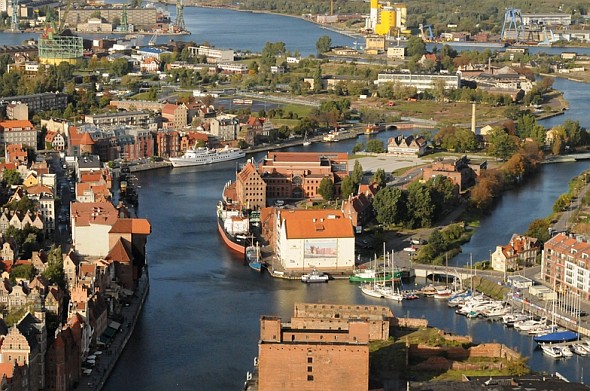