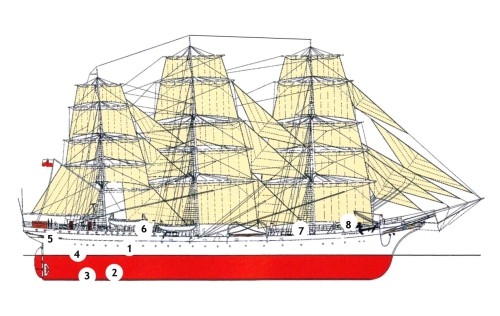 1. Tween-deck – The visiting tour of “Dar Pomorza” usually begins at the between-decks, where the students used to live during cruises. Today you can learn here the history of the ship from the exhibition board showing pictures and maps. Interesting objects from the ship’s past have been collected here, including a ceremonial flag, where besides the national emblem – the White Eagle in a crown – is the Pomeranian Griffin – the emblem of the region.

2. Engine room – In the engine room you can see all the equipment which permitted cruising in unfavourable weather. Those are the engine, generator, pumps, compressors and other types of mechanical equipment.

3. Sail store – “Dar Pomorza” capacity was 2260 m² of sail; usually there were three sets of sails in storage, including the heaviest one of about 400 kilograms.

4. Officers’ rooms – Officers’ cabins may be visited here, and the officer’s messroom including the pantry.¹

5. Rooms for senior officers – Here, in one of the cabins is a collection based on objects from Karol Borchardt’s house – a famous Polish writer who devoted most of his books to the sea, and who in the period 1938-39 served as first mate on the “Dar Pomorza”. On this level you can also visit the captain’s sitting room with a pantry, bedroom and a bathroom, plus a special owner’s cabin. The sitting room is now a place for the collection of souvenirs and prizes won by “Dar Pomorza”. Some of the most precious are: a silver model of the boat and a silver brick – the first prize in the regatta Operation Sail 72.

6. Deck – steering wheel, chart and radio room as well as 42 metre high masts. During cruising the students climbed the shrouds every morning to improve their physical fitness.

7. Galley – The galley on the “Dar Pomorza” operated 24 hours a day. During the daytime 200 meals were prepared and during the night the cook used to bake bread for the next day.

8. Forecastle – The visiting tour usually finishes at the forecastle with the “Dzwon Zwycięstwa” (Victory Bell), which the ship received after Operation Sail’72.

¹ Pantry is a little cupboard, tiny room where during the meals the table set is being prepared and where the dishes from the caboose are being made ready to be served in the mess.