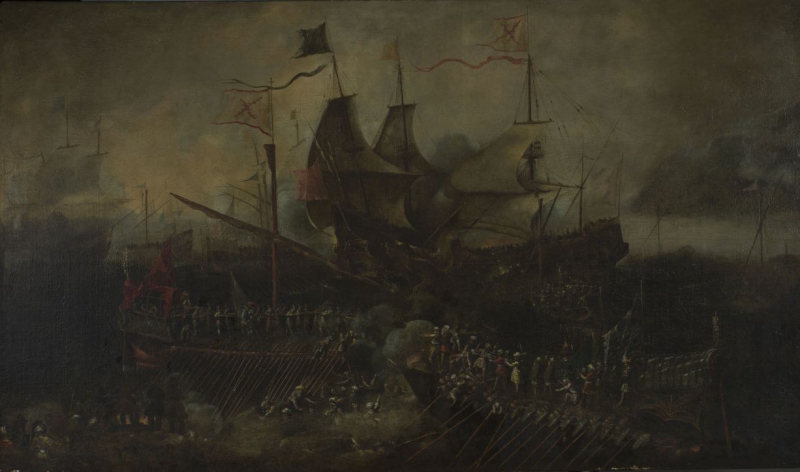 The National Maritime Museum in Gdańsk collects historical artefacts related to the maritime history. In the scope of the fine arts collection, from the start of its operation, one of the Museum’s priorities has been creation of a collection of paintings by the former Dutch School in such a way as to present a synthetic overview of the main trends and achievements of the Dutch seascapists.

“Due to the subsidies granted by the Ministry of Culture and National Heritage, our collection has been enriched by a remarkable work. This is the first monumental battle scene painting in the Museum’s collection which presents a clash of the Christian and Turkish fleets in a dramatic and expressive way and is also rich in details related to the sea battle techniques”, says the NMM Director, Jerzy Litwin, PhD. “During the Night of the Museums (20-21 May), the painting has been showcased in the main seat of the Museum – in the Granaries on Ołowianka Island – in the Maritime Arsenal hall which hosts the collection of the 17th century ship weaponry”.

Strength of the painting
The painting entitled “Sea Battle” is dated by the experts to the 17th century and is related to the Dutch School based on the analysis of the painting style. The painting presents a sea battle of galleys and vessels with a sailing propulsion under the flags of Turkey and countries of the Christian Europe. The foreground is comprised of a clash of two galleys – one Christian and the other Turkish, while the background presents two struggling sailing vessels. All the way to the skyline, there are other vessels, both with sailing and paddle and sailing propulsion.

“The strength of the painting is created by the great artistry of its author who managed to capture the battle on a few planes, with its full dramatic nature and richness of details”, emphasizes Monika Jankiewicz-Brzostowska of the Maritime Art Department. “We can see all attributes of the traditional battle scene painting: impressive silhouettes of clashing vessels enveloped in the artillery smoke, sails filled with the wind and fanciful flags streaming in the air, as well as the navy ranks fighting on two vessels in the foreground – aiming muskets, taking shots and threatening each other with weapons. We can also see victims – those hit by bullets slumping into the arms of their companions and those pushed out of the vessels, fighting for their life in the white water between the bows of the two galleys, one of them bleeding from a wound of the cut off right hand. There are bodies of the fallen drifting in the water”.

Monika Jankiewicz-Brzostowska, PhD, also emphasizes that a baroque, a little theatrical convention, in which the painting was create, may be appreciated by viewers. This effect was reached by great precision in presenting the silhouettes of the vessels, dramatic poses of the participants of the battle, richness of the presented uniforms, emphasized by the impastos of valuable materials or ornament details. The high class of the author is also underlined by the fact that a great number of presented details does not interfere with the dramatic effect and sophisticated aesthetics of the composition.

Unfortunately, it has not yet been determined which battle was captured on the described painting.

The painting and Poland
Participation of Turkish galleys in the presented battle makes the subject painting interesting also from a historical point. “Despite the fact that the Republic of Poland fought against Turkey on land, captured Poles were often enslaved as oarsmen on galleys”, emphasizes Jankiewicz-Brzostowska, PhD.

This practice is proved by a votive painting, dating back to ca. 1655, from the St Mary Magdalene and St Stanislaus church in Szczepanów, which features the Mother of God taking oarsmen working on a Turkish galley under her care. Six of them were identified under Polish surnames. An inscription at the bottom of the painting specifies that the donor was captured by the Tatars in the Battle of Korsuń (26th May 1648) and brought to Constantinople as a galley slave. He spent seven years on the galley and after being released, he funded the described painting. Its copy is presented at the permanent exhibition of the NMM in the Granaries on Ołowianka Island. A model of the felucca serving as decoration of the Artus Court in Gdańsk had a similar origin. According to historians’ findings, its author was enslaved by the Turks in one of Venice-based estates. When five years later he was ransomed and taken care of by the Gdańsk Seamen Brotherhood, he paid his debt by building a model of the vessel which he was made to serve on as a galley slave.

“It may be assumed that oarsmen on the Turkish galley pictured in the foreground of the “Sea Battle” painting are also prisoners of war. This is supported by the fact that they are bareheaded while the Turkish soldiers are pictured with turbans, even when they are sinking. A gesture of the Turkish soldier who kneels down and clearly aims his cane at the oarsmen in an attempt of making them work harder and disciplining them is very significant”, emphasizes Jankiewicz-Brzostowska, PhD.

Partially funded by the Ministry of Culture and National Heritage.