Home>News, Permanent exhibitions>Archive>“Storm in the Port” at the Maritime Gallery 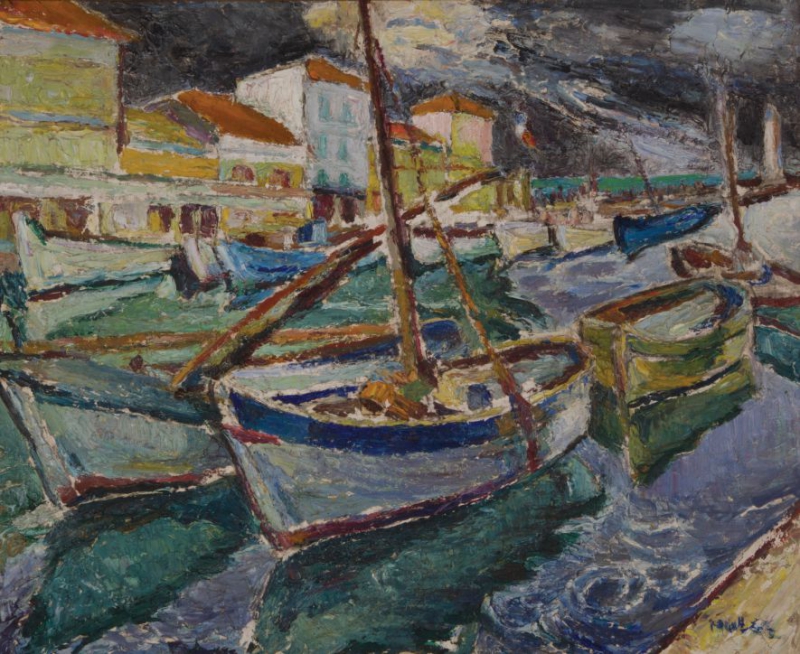 “Storm in the Port” at the Maritime Gallery

The collection of Polish maritime art of the National Maritime Museum has been enriched by the painting “Storm in the Port” by an eminent artist Mela Muter. Purchased due to the subsidy granted by the Ministry of Culture and National Heritage, the painting will be exhibited at the Maritime Gallery.

“Mela Muter was an outstanding artist. Together with Olga Boznańska, she is recognized as one of the leading representatives of the Polish art in France”, emphasized Liliana Giełdon, Head of the NMM Maritime Art Department. “Until now, none of her works constituted a part of the Museum collection, and she was a painter who enjoyed maritime subject and explored it many times”.

“Storm in the Port” is a painting dating back to the 1920s which represents a view of a small port at the beginning of a storm. Hulls and rigging of the boats are pictured with a unique realism which allows for a quite precise identification of a port located in the South of France. An inscription on the back of the painting provides the name of a commune of Le Grau-du-Roi which lies between Marseille and Montpellier.

“Mela Muter created an individual style which is characterised by a paint with a thick paste consistency, applied with small but decisive brushstrokes, and by muted colours”, Liliana Giełdon describes the artist’s works. “Small colour spots applied freely, however with high precision create a flickering, living painting tissue which in combination with a distinctive texture creates a uniquely expressive and decorative effect”.

Maria Melania Mutermilch – biography
Maria Melania Mutermilch (1876, Warsaw – 1967, Paris) was born to a wealthy Jewish family assimilated in Poland, however she thought of herself as a Pole. Her father, Fabian Klingsland, was a merchant and a philanthropist, her brother, Zygmunt, was a literary critic and an advisor to the Polish Embassy in Paris. Despite the fact that the artist studied first at Miłosz Kotarbiński Drawing and Painting School for Women in Warsaw and next at Académie Colarossi and Académie de la Grande Chaumière, she never received an official diploma and therefore was considered to be a self-taught painter. In 1899, the artist married Michał Mutermilch, a writer. She enjoyed the company of the Parisian artistic elite and was acquainted with Auguste Rodin, Diego Rivera, Romain Rolland, Henri Matisse, and such Polish artists as Stefan Żeromski, Jan Kasprowicz, Władysław Reymont. The painter debuted in 1902 at the annual Parisian Salon, and had been its regular participant ever since. She exhibited her works in Barcelona, Cologne, New York and also in Krakow, Warsaw and Lviv. She was a member of the Polish Artistic and Literary Association and the Society of Polish Artists. In 1922, after her father died, the artist came to Warsaw. Shortly afterwards, she got divorced and her only son died in 1924. Her personal tragedies were compensated for by her artistic successes. The 1920’s and 1930’s are considered to be golden years of her artistic career. She managed to survive World War II in Avignon. After the war, she returned to Paris where she died in 1967.

The works by Mela Muter evolved on a formal level. At first, she remained under the influence of symbolism, however later she became fascinated by the achievements of the Pont-Aven school. She also draw inspiration from Fauvism and Impressionism, with some indirect inclinations for cubism. The artist created over a thousand paintings. Her works include oil paintings on textile, plywood and cardboard supports, watercolour paintings, charcoal and pencil drawings and sketches. She often created double-sided paintings. She never left her sketchbook behind and drew and painted with water colours in the underground, cafés and boulevards. She was mostly focused on landscape and genre painting. Her landscapes include a number of views of small ports in the South of France which she visited repeatedly during the 1920s. She also painted the coasts of Brittany and Catalonia.