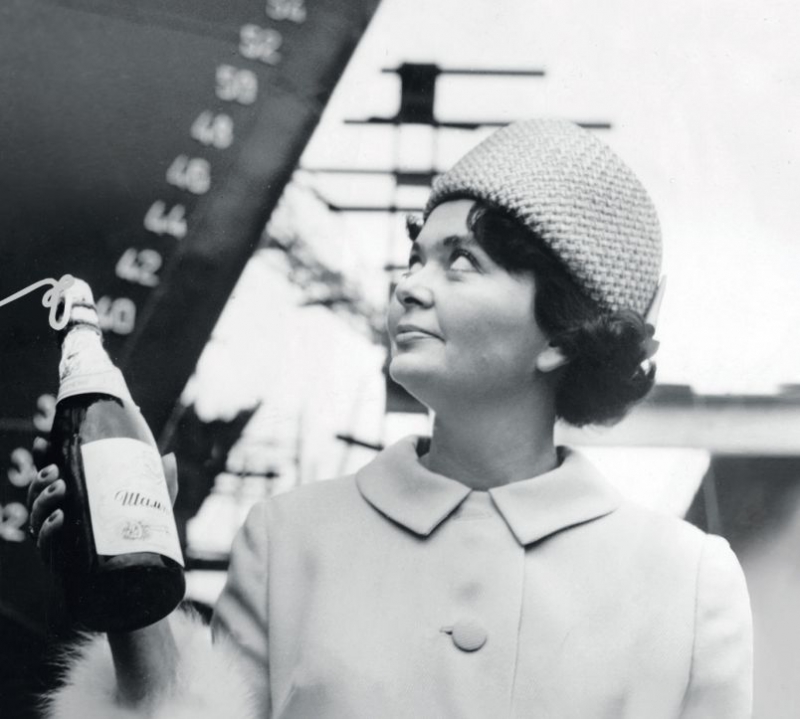 “Mothers and Ships” – exhibition on “Sołdek”

Huge screens with ship christening archive films, whole columns of documentary materials and an interactive stand at which visitors can symbolically ‘break’ a bottle against a ship’s side. All of the above will be presented at the newest exhibition, organized by Klub Matek Chrzestnych Statków Armatorów Wybrzeża Gdańskiego [Ship Godmothers Club of Gdańsk Coast Shipowners’ Ships], which is held on “Sołdek” ship-museum.

Ceremony
There has always been something magical about ship christenings. The Vikings launched their longships on the backs of slaves which, they believed, would transfer people’s strength onto the keel of a boat. Centuries later, bows of launched ships were poured with wine to bring good fortune. The custom of breaking a bottle of champagne against a ship’s side was initiated in the 1930s. For many years, christening ceremonies were hosted by men, however in the mid-19th century this privilege was granted to women.

First ladies and wives
Quite often, it is the first ladies who become godmothers, for instance Anna Komorowska (Pasat), Maria Kaczyńska (Bioton), Jolanta Kwaśniewska (Nawigator XXI) and Franciszka Cegielska, the Mayor of Gdynia (A. Abraham and Heros). This great privilege was also granted to a number of actresses, e.g. Ryszarda Hanin (Lenino), Anna Przybylska (Stena Spirit), to writers, e.g. Halina Auderska (Frycz Modrzewski), Alina Centkiewiczowa (Wrocław) and sportswomen, e.g. Krystyna Chojnowska-Liskiewicz, a sailor, and Irena Szewińska, an Olympic multimedalist. It was also quite frequent that a godmother was chosen among relatives of a ship’s patron, e.g. a wife – Zofia Ledóchowska (Kapitan Ledóchowski), Helena Sołdek (Sołdek) or a daughter – Ewa Obrąpolska (Eugeniusz Kwiatkowski).

Symbols and emotions
Every godmother stresses that a ship naming ceremony is always very emotional and moving. Attention of the guests is focused on the moment of breaking a bottle against a ship’s side as well as on a meaningful short formula which starts with the following words: “Sail the seas and oceans, glorify Polish shipyard workers and sailors, bring glory to the Republic of Poland. I hereby name you…”. Despite the passage of time, technological progress, technological improvements in construction of ships, the role of a godmother is not subject to change. Preservation of a symbolic character of the ceremony, an unchanging nature of accessories related to it, repetitiveness of the formula uttered at the ceremony – all of these elements are meant to bring good fortune to the ship and her crew.

Occupation – a godmother
The role of godmothers does not end with the ceremony. As a rule, ladies try to maintain contact with their ‘godchildren’ by collecting and storing information about the ship, sending holiday cards to the crew, collecting photos taken on cruises, keeping record of the most important events from the ‘life’ of the vessel. Membership in the elite club of godmothers also includes acting as an ambassador of maritime activities of Poland as well as promotion of sailing.

Exhibition
“Mothers and Ships” exposition is a collection of exhibits which are directly or indirectly related to godmothers’ activities. Printed archival records, fragments of letters, newspaper articles and photos are presented on huge mobile columns hung just below the ceiling. The exhibition is based on life experience and memories of individual godmothers whose stories are presented at interactive stands. Films taken at ship christenings bring visitors closer to emotions involved in the ceremony. Exposition layouts change, there are smooth transitions between the world of tools, photographs, documents and the general idea of shipbuilding. All stages of a ship’s life – from the design through consecutive stages of construction, the launch, first cruises, important voyages, up until becoming a part of history – are connected by the godmother’s figure. 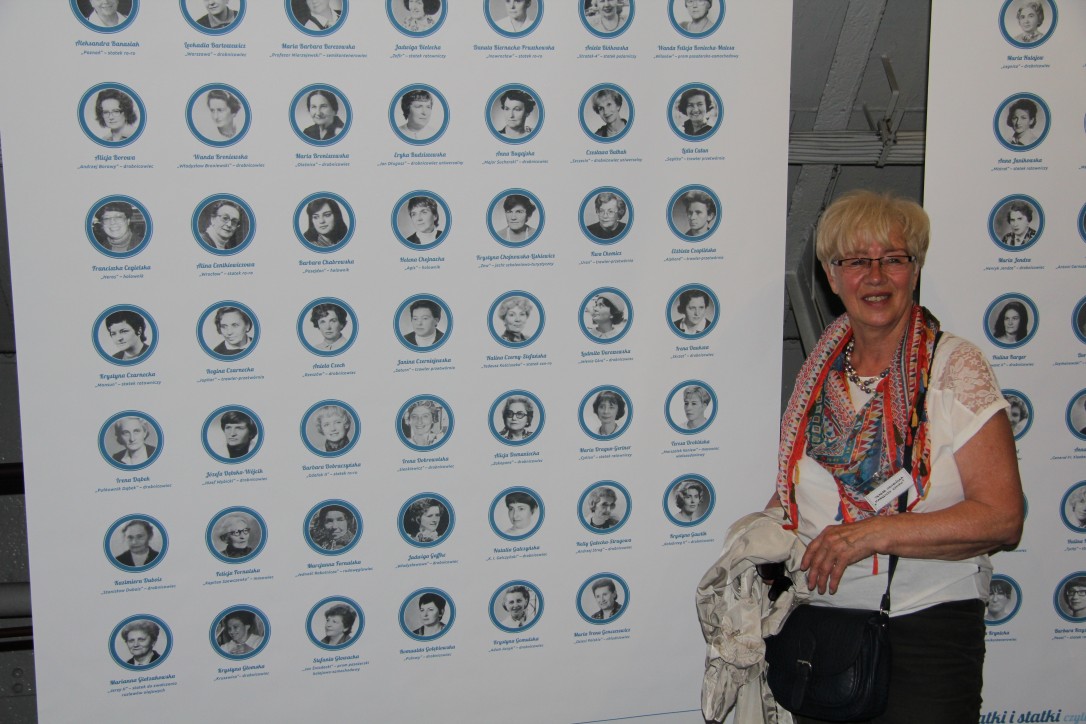 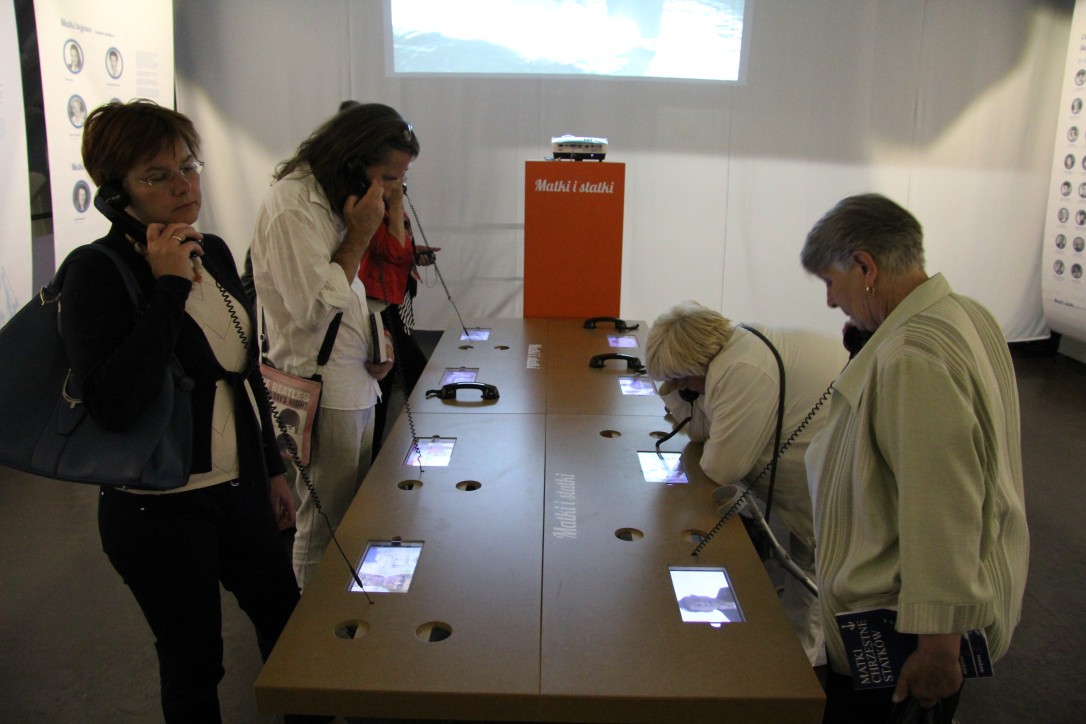 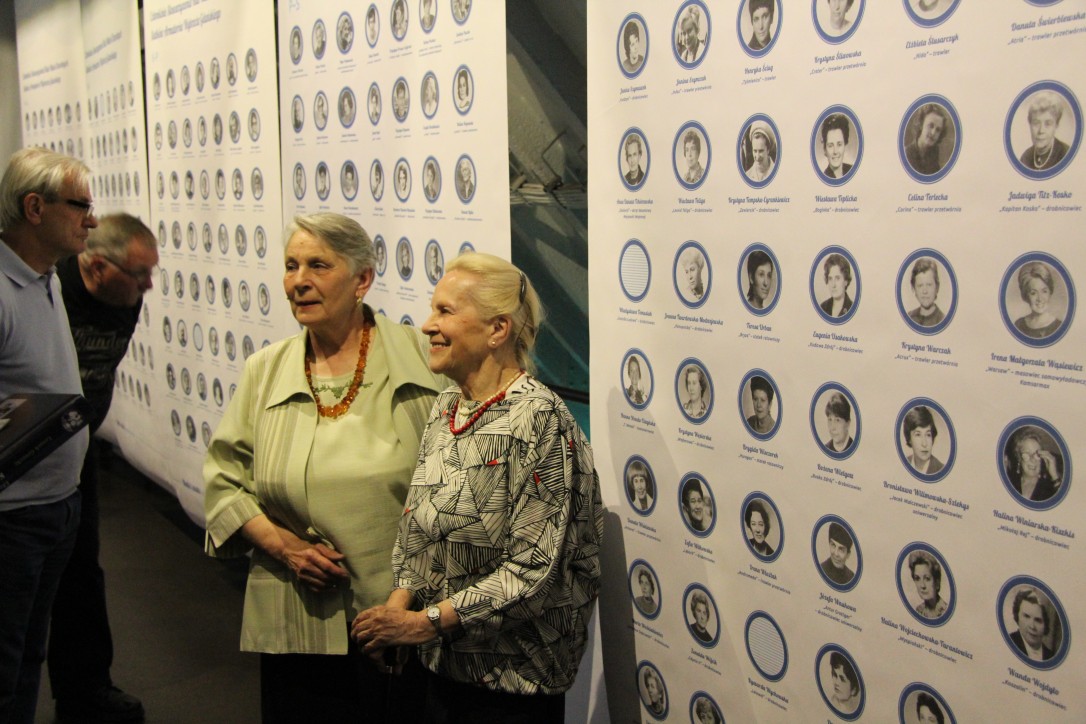 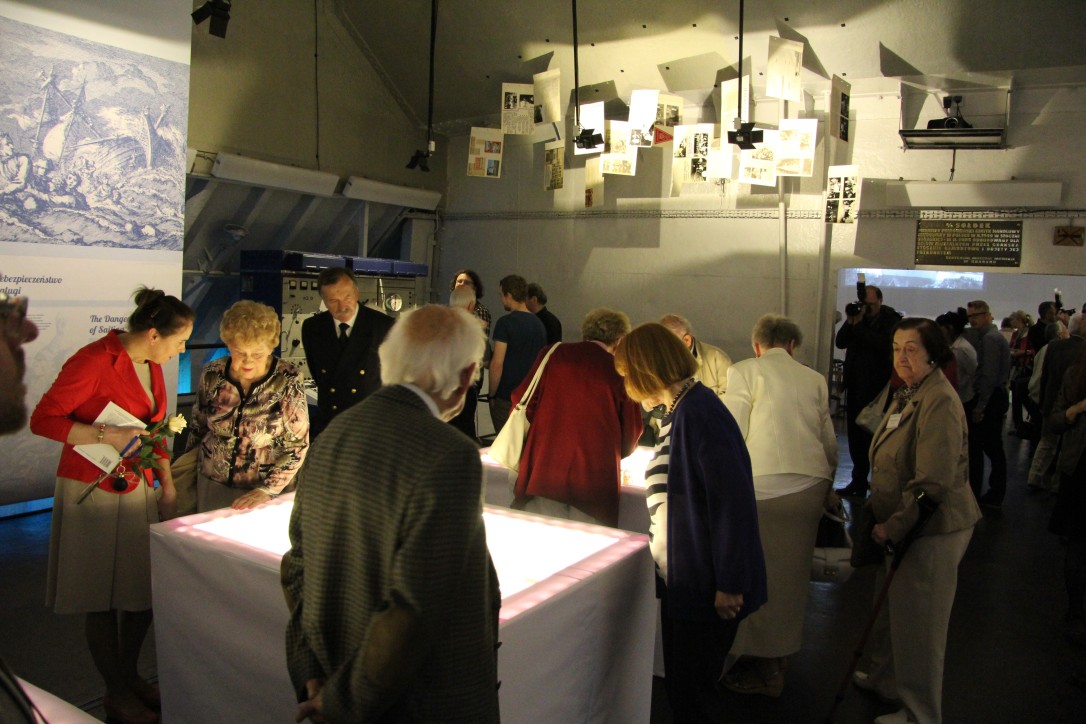 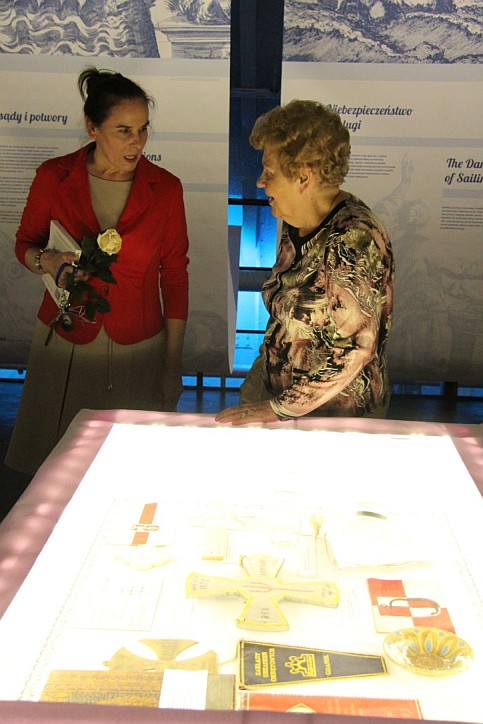 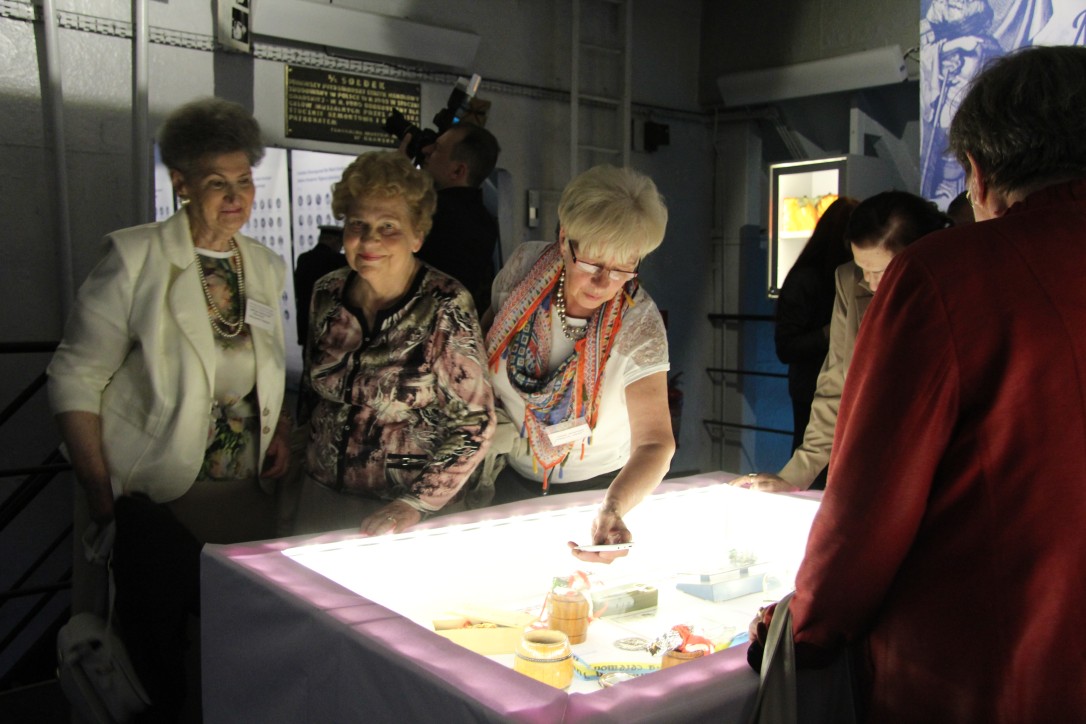 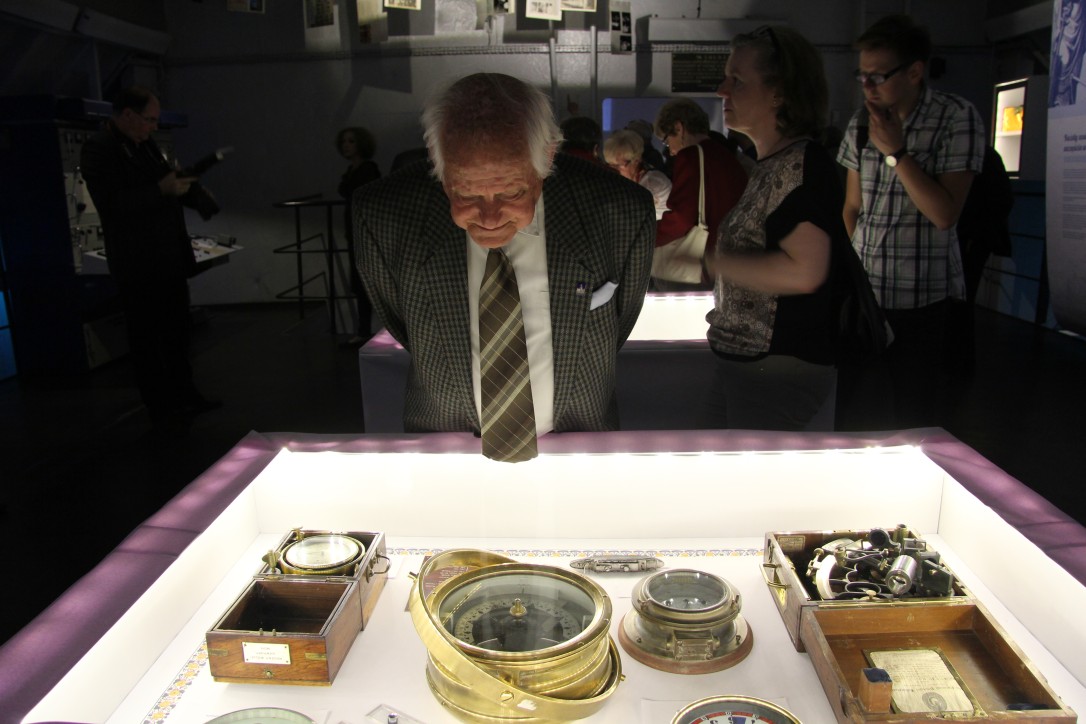 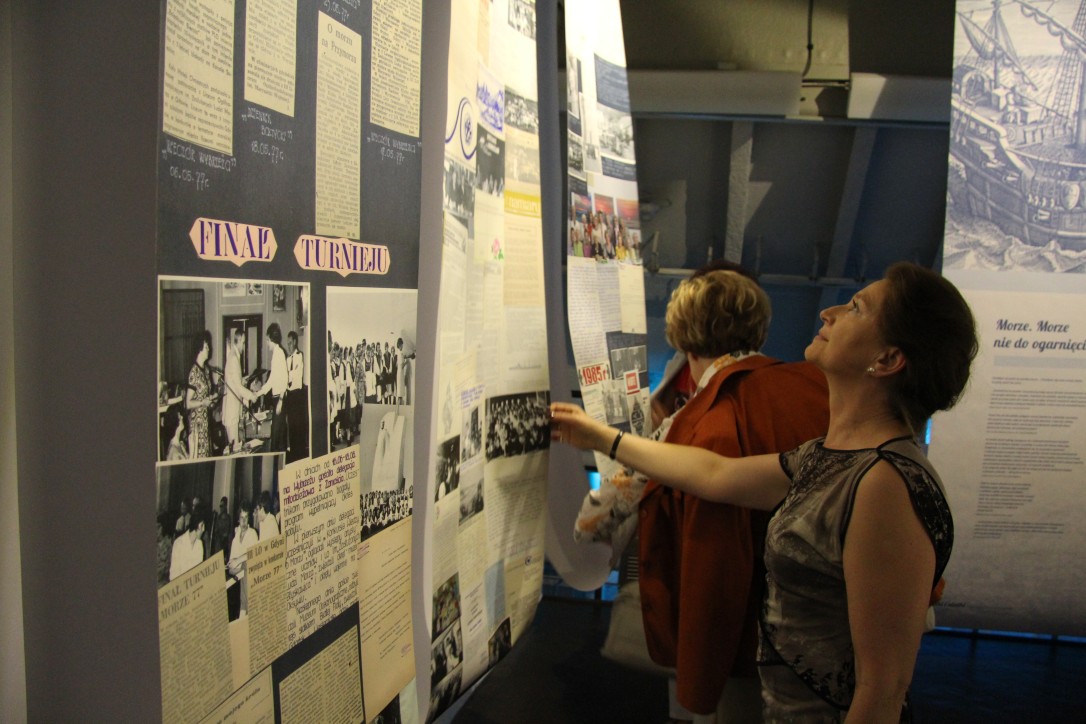 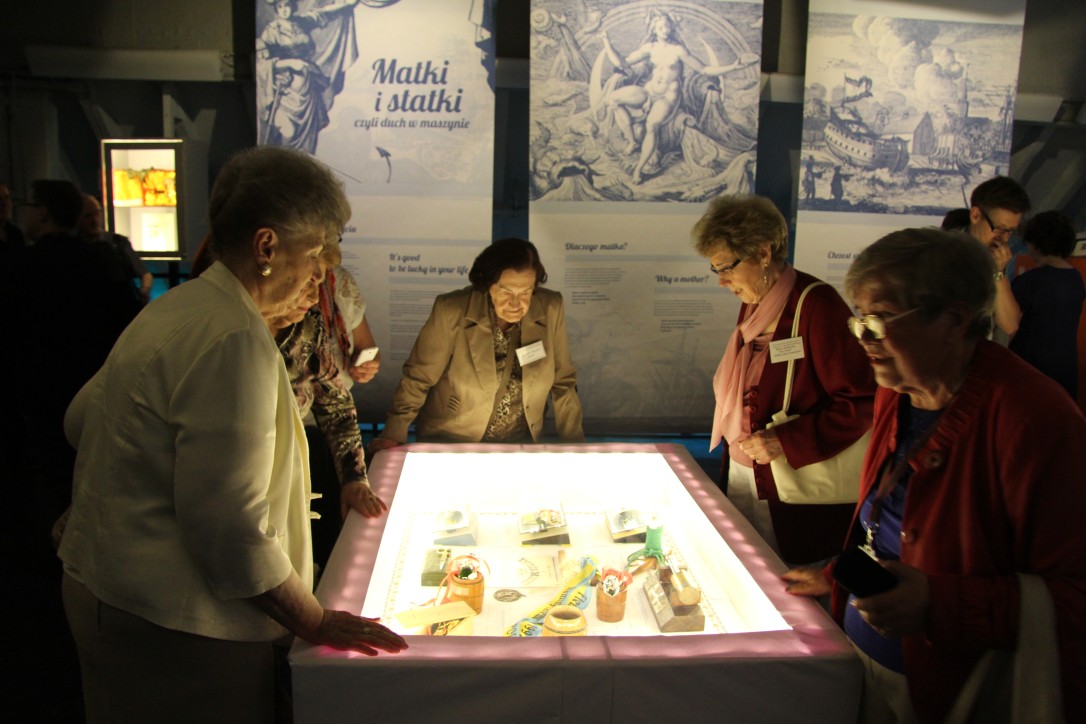 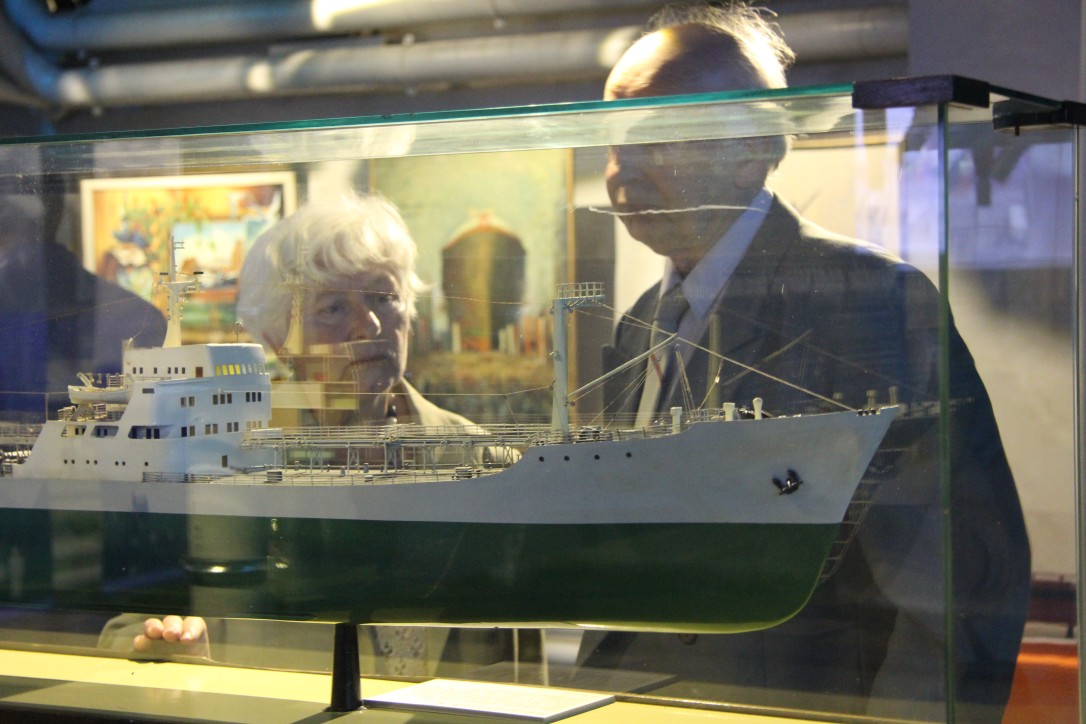 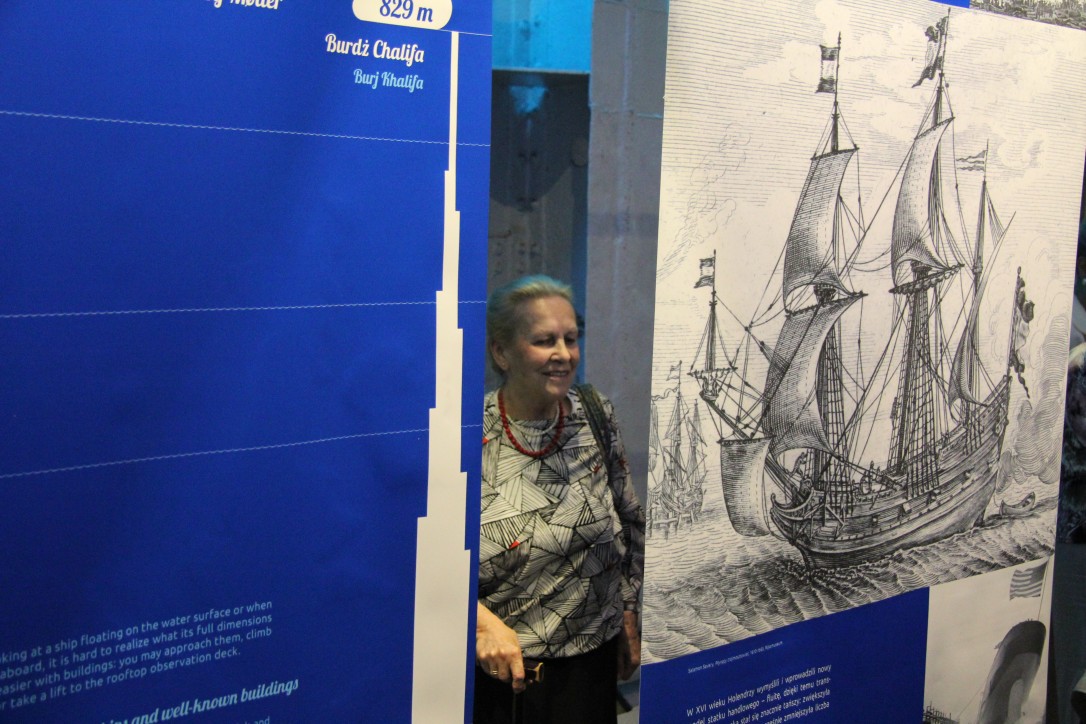 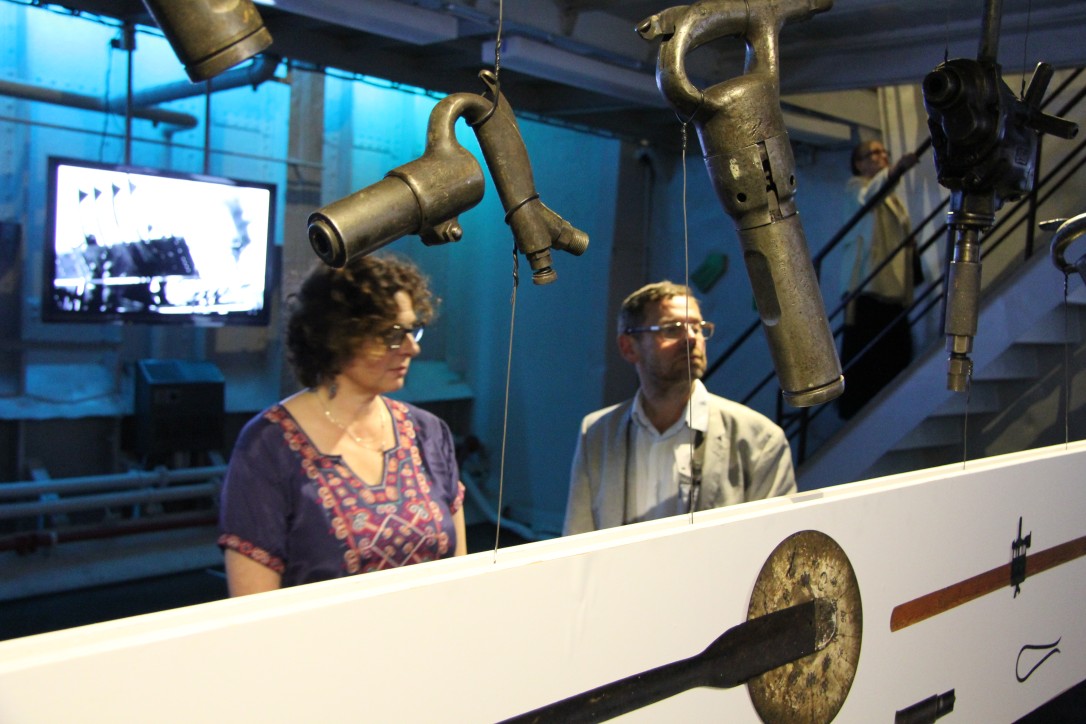 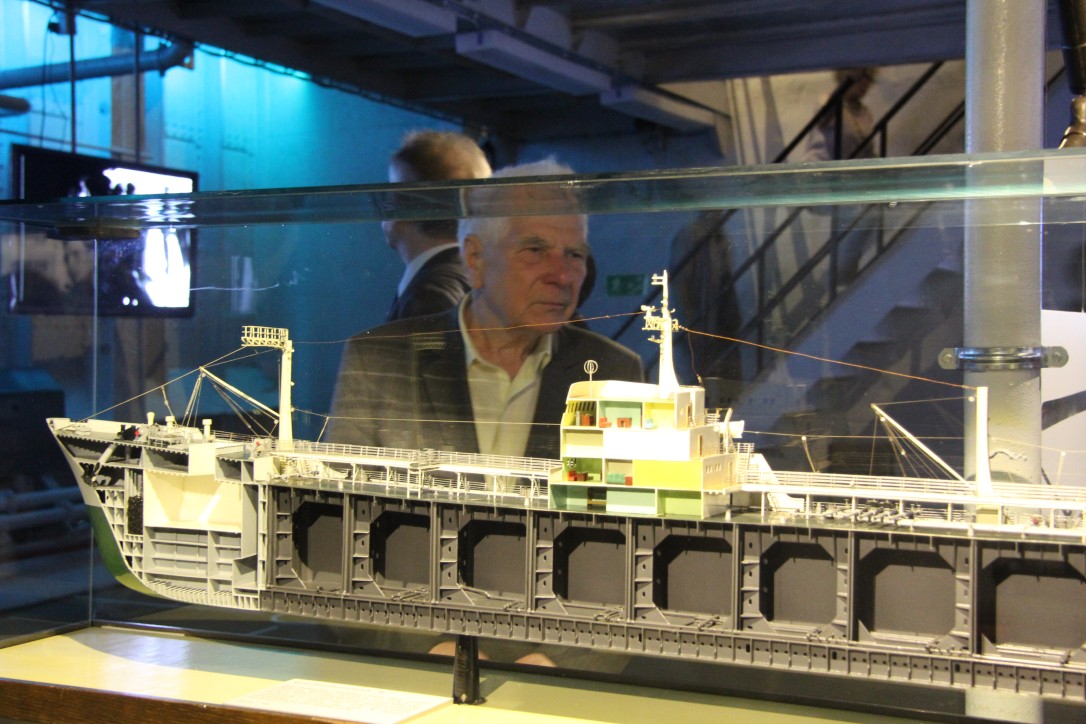 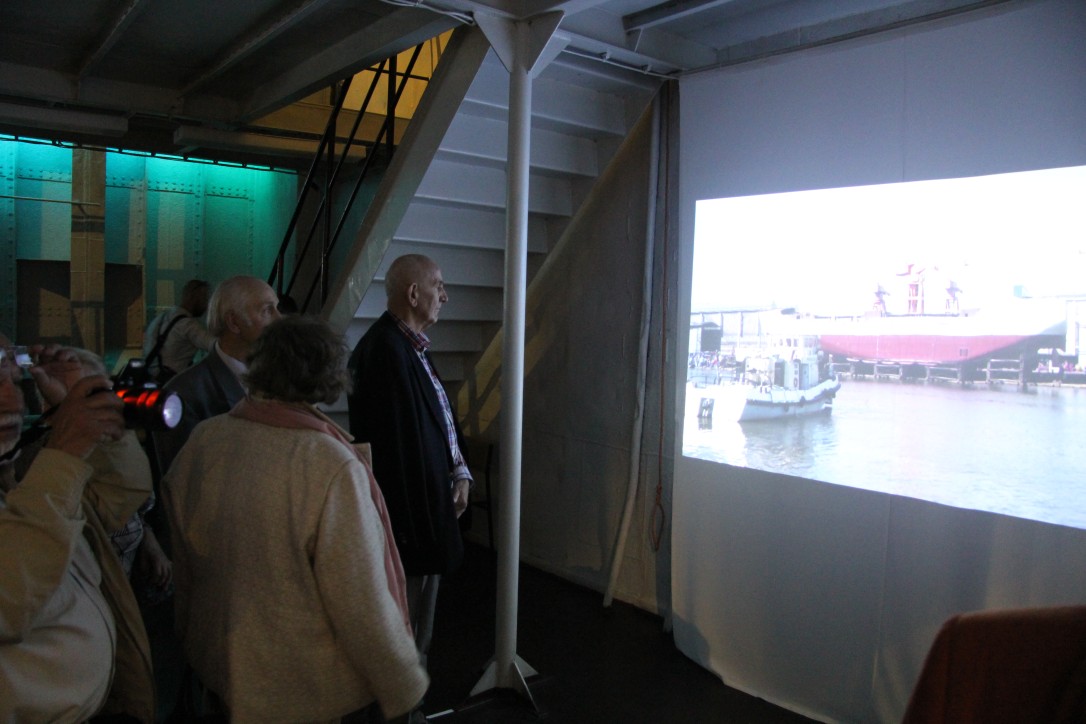 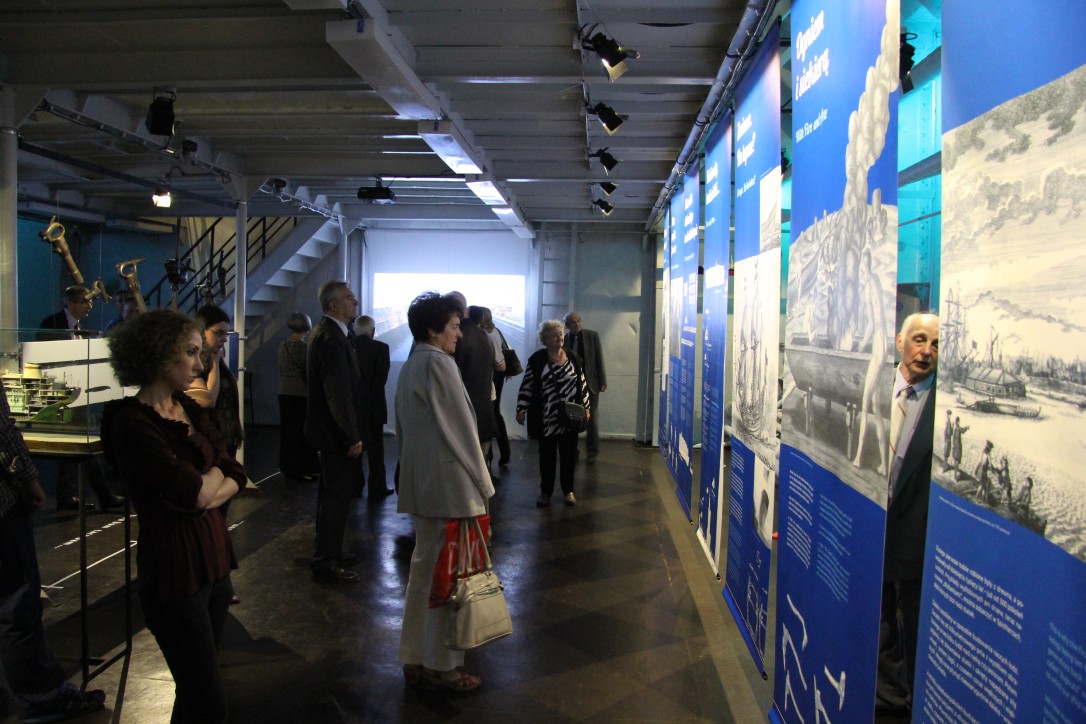 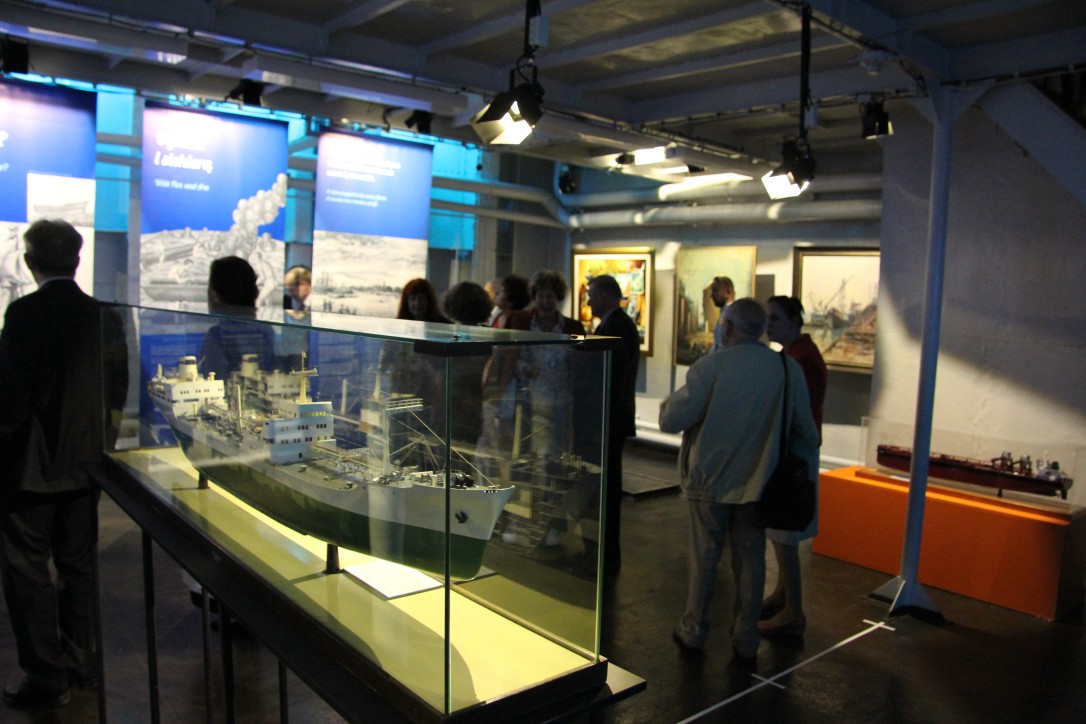