Home>News>Archive>Cornerstone Laid for the Conservation Centre 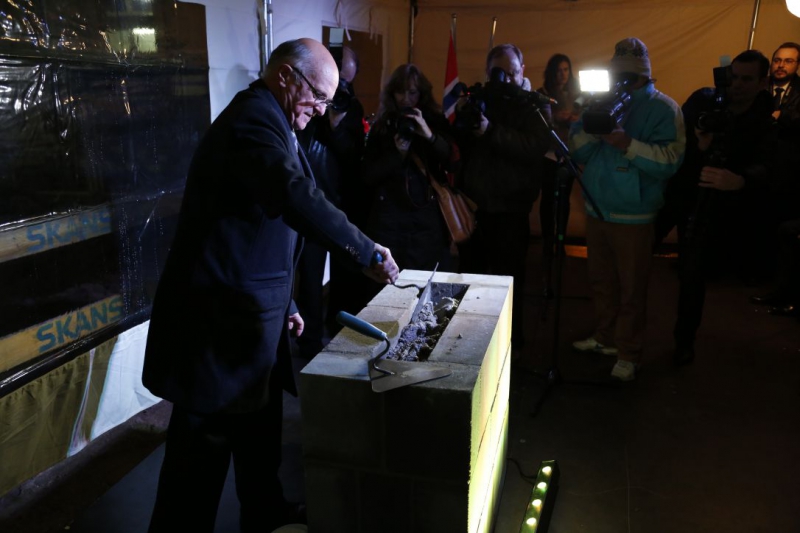 Cornerstone Laid for the Conservation Centre

On 24th November, a cornerstone laying ceremony was held for the new investment of the National Maritime Museum in Gdansk – the Shipwreck Conservation Centre combined with Studio Warehouse in Tczew.

The ceremony was the result of several years of work aimed at creation of a sight which could fulfil the requirements of the developing Museum. “Today, we are making our plans and dreams come true,” said Jerzy Litwin, PhD, Director of the National Maritime Museum, at the cornerstone laying ceremony. “Forty years ago, when we established positions of an underwater archaeologist and conservator, our specialists were working in quite tough conditions of former post-factory warehouses. Due to Norway Grants, we are now able to establish a centre which will represent the highest standards.”

The Studio Warehouse in Tczew will be equipped with cutting-edge technology used for renovation of historical monuments, including an advanced 3D scanner and a mobile X-ray unit. Water tanks with shipwrecks under conservation will be placed here. In addition, the Centre will be used as an exhibition facility. A part of the building will serve as a studio warehouse open for visitors and equipped with multimedia stands. Construction of the Shipwreck Conservation Centre was commenced in July 2014 and its completion is scheduled for December 2015. Skanska S.A. is conducting construction of the Centre in Tczew. “The project will undoubtedly be completed on time or even a few days earlier,” assured Radosław Kaflowski, Director of General Construction Department of SKANSKA S.A. in Gdansk.

Professor Małgorzata Omilanowska, Minister of Culture and National Heritage, was an honourable guest of the ceremony who emphasized the significant role of the National Maritime Museum and the Museum’s prestige on the European scale. “The Museum is the pride and joy of the Ministry,” declared Professor Omilanowska. “I am particularly delighted that the new department will be established in Tczew.”

“It will be a pride of Tczew as well as a tourist attraction for the whole Pomerania,” claimed Mieczysław Struk, Marshall of the Pomeranian Voivodeship, attending the cornerstone laying ceremony. Mirosław Pobłocki, Mayor of Tczew, pointed out that the investment is complementary to the actions undertaken by the City in the post-factory area which for several years has been the seat of the Vistula River Museum. “May it be another grand achievement of the National Maritime Museum,” added the Mayor.

The project of the Conservation Centre in Tczew will be conducted due to the Polish-Norwegian partnership with the Norwegian Maritime Museum in Oslo and the Museum of Cultural History in Oslo. The cornerstone laying ceremony of the Shipwreck Conservation Centre was attended by Michał Rzeszewicz, Consul of the Kingdom of Norway, and Wojciech Kolańczyk, former Ambassador of Poland in Norway.

The cornerstone laying ceremony in Tczew was also attended by representatives of the Ministry of Culture and National Heritage and the Ministry of Infrastructure and Development, as well as by representatives of the Council of National Maritime Museum in Gdansk, including Fryderyk Tomala, PhD and Professor Daniel Duda. Another honourable guest was Eugenia Pokorska–Sawczuk, President of Bank Spółdzielczy w Tczewie, and Alicja Gajewska, Director of the Arts Factory.

Ecumenical blessing of the cornerstone was conducted by Mitred Prelate Stanisław Grunt of Diocese in Pelplin and Father Marcin Hintz, professor, PhD, Bishop of the Diocese of Pomerania-Greater Poland of Evangelical Church of the Augsburg Confession.

Project “Shipwreck Conservation Centre with Studio Warehouse in Tczew – construction of new cultural infrastructure of the National Maritime Museum in Gdańsk” is being conducted as a part of the Conservation and Revitalization of National Heritage Programme and has been co-financed by the Norway Grants and EEA Grants from Iceland, Liechtenstein and Norway, as well as by Polish national funds. The total cost of the project is 22 million Polish zloty. The project is conducted due to the Polish-Norwegian cooperation with the Norwegian Maritime Museum in Oslo and the Museum of Cultural History in Oslo.

The Centre will be constructed in Paderewskiego Street in Tczew, in close vicinity of the Vistula River Museum and the Arts Factory. 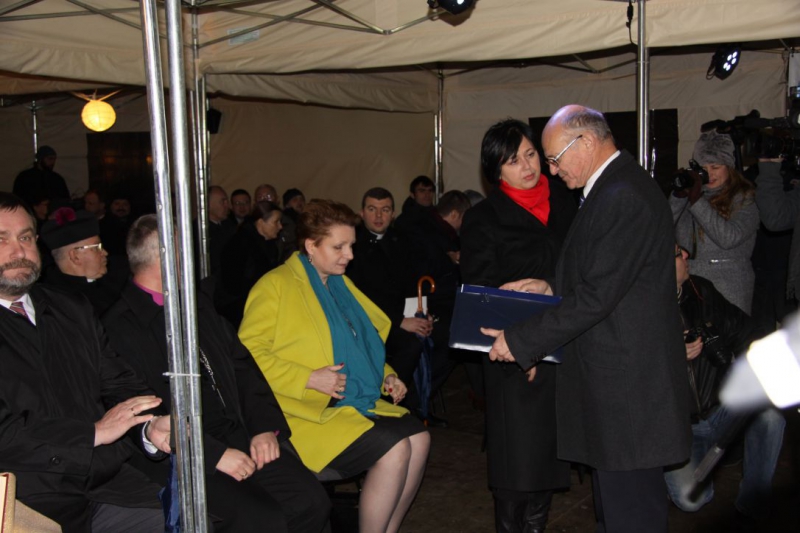 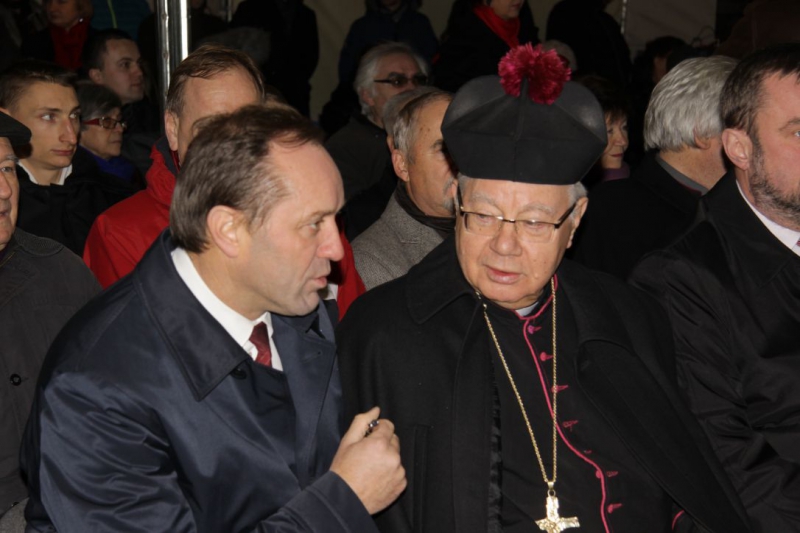 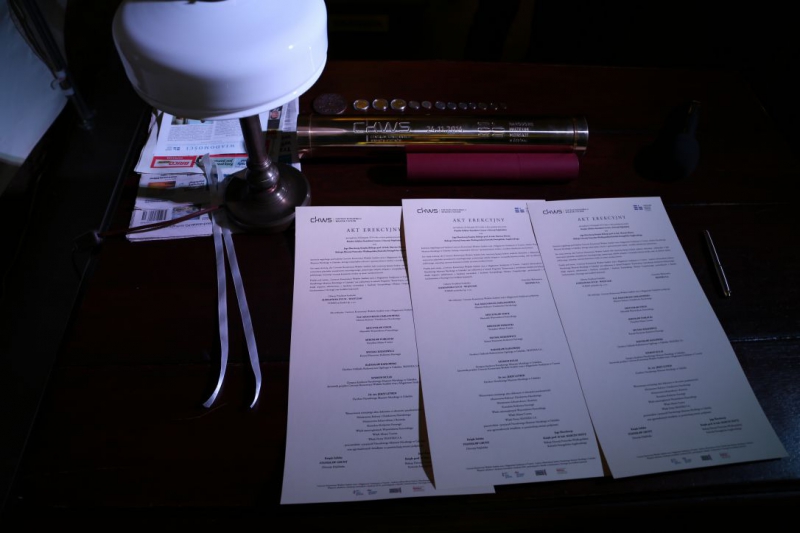 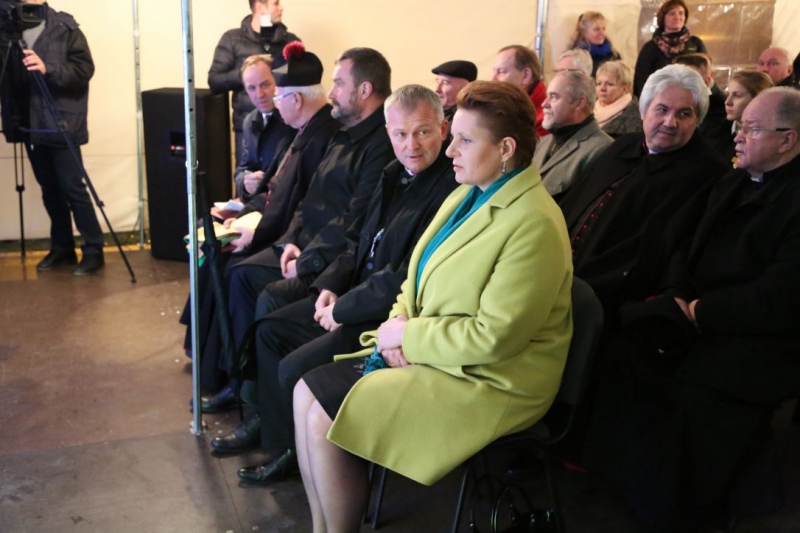 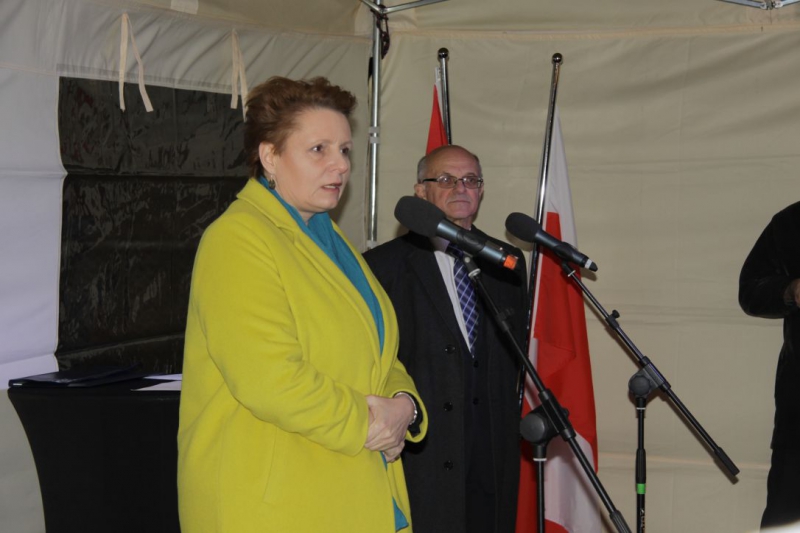 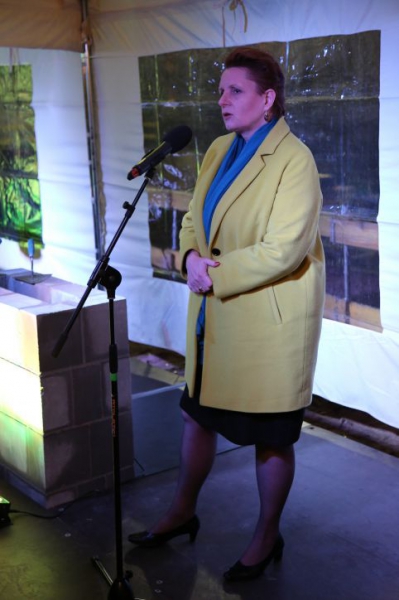 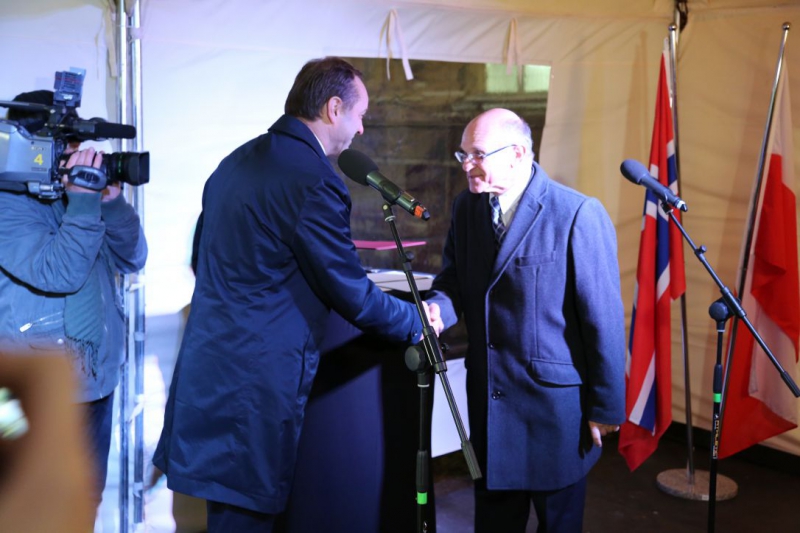 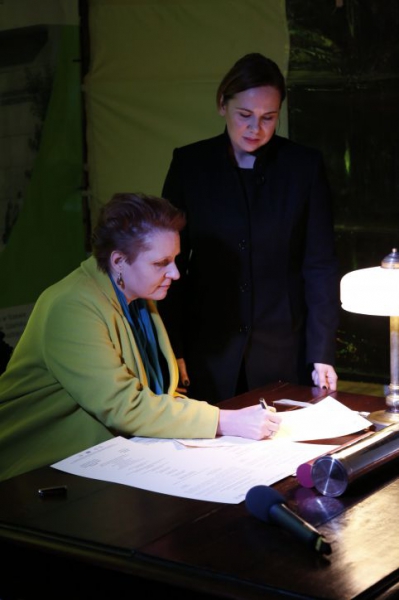 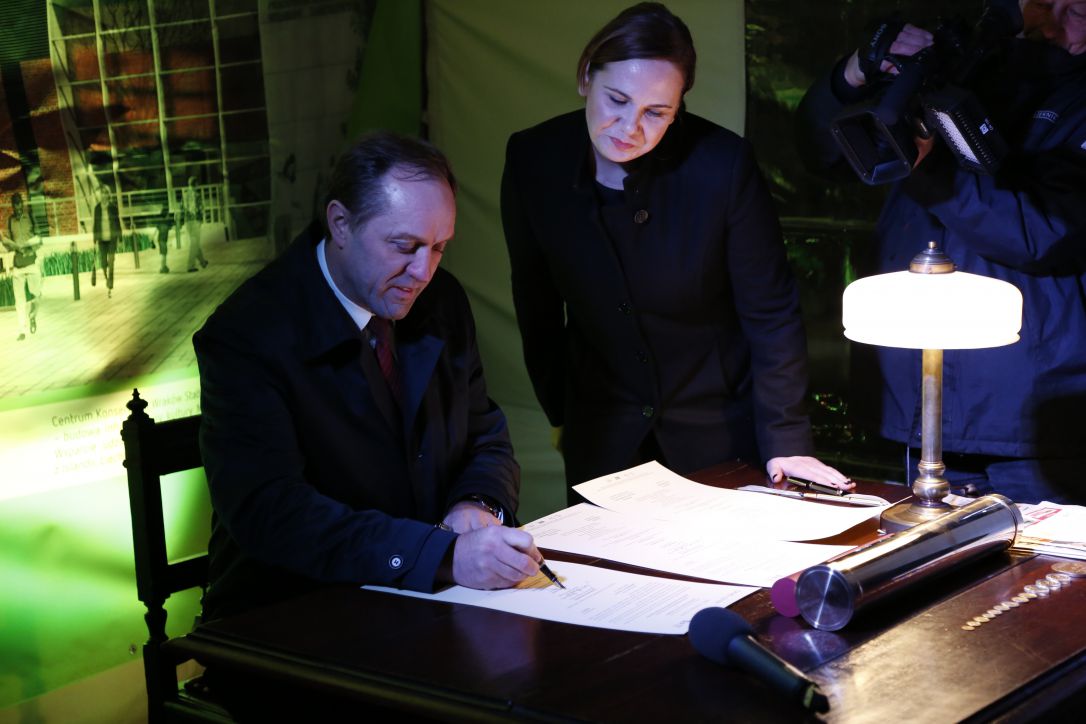 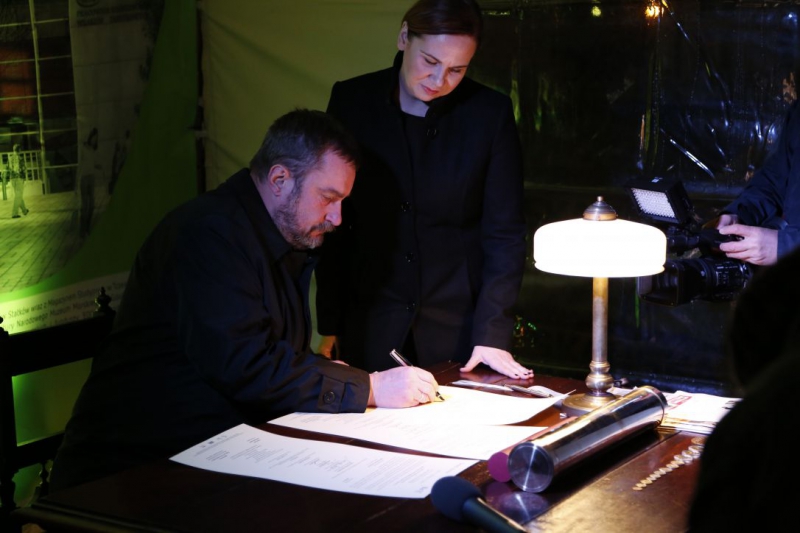 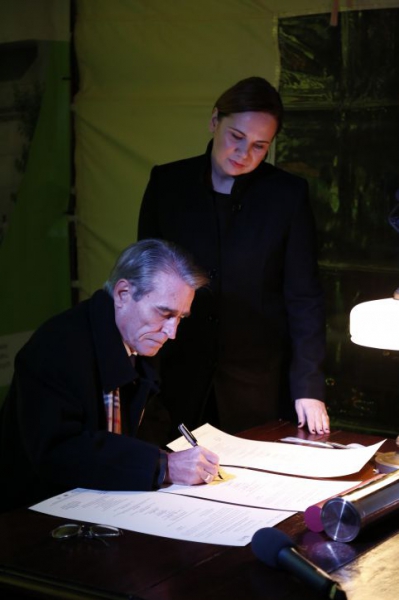 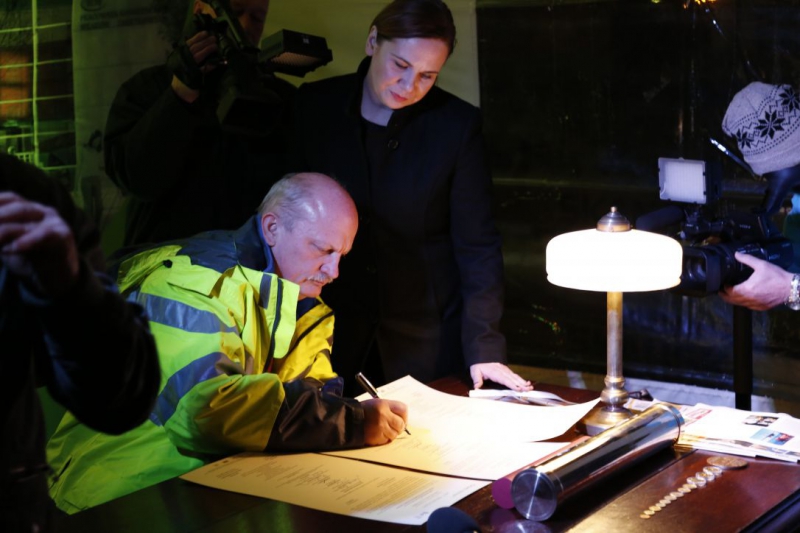 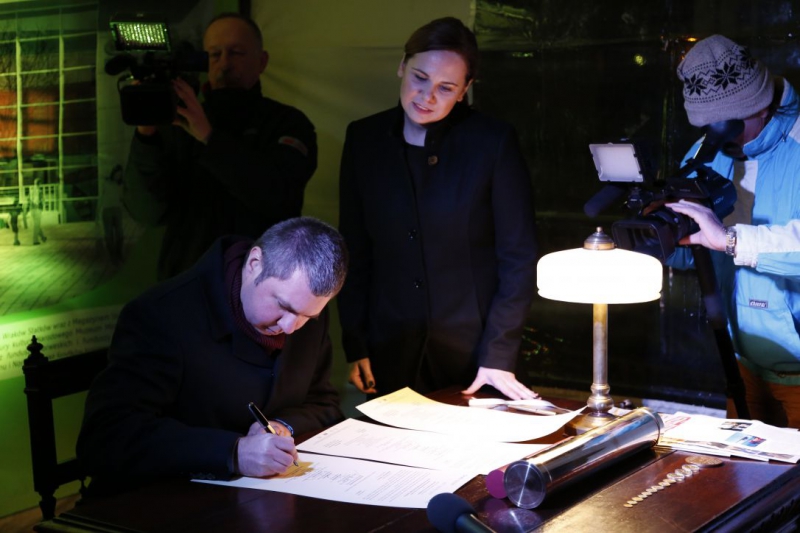 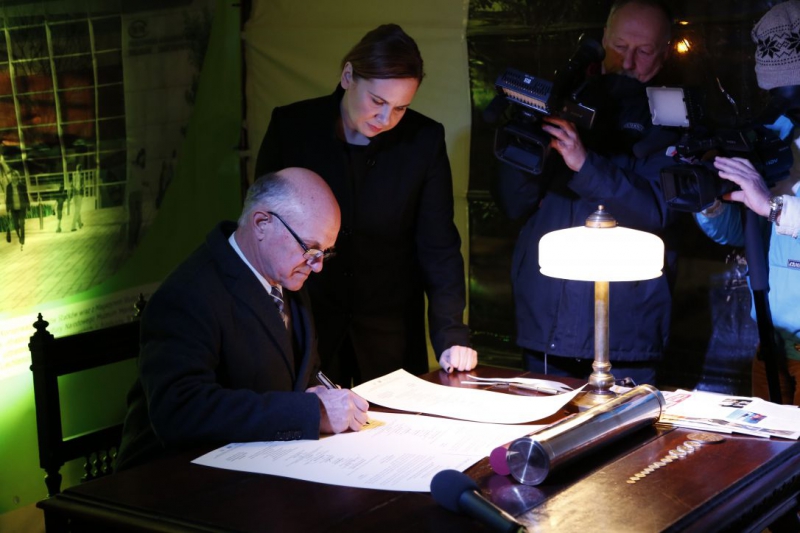 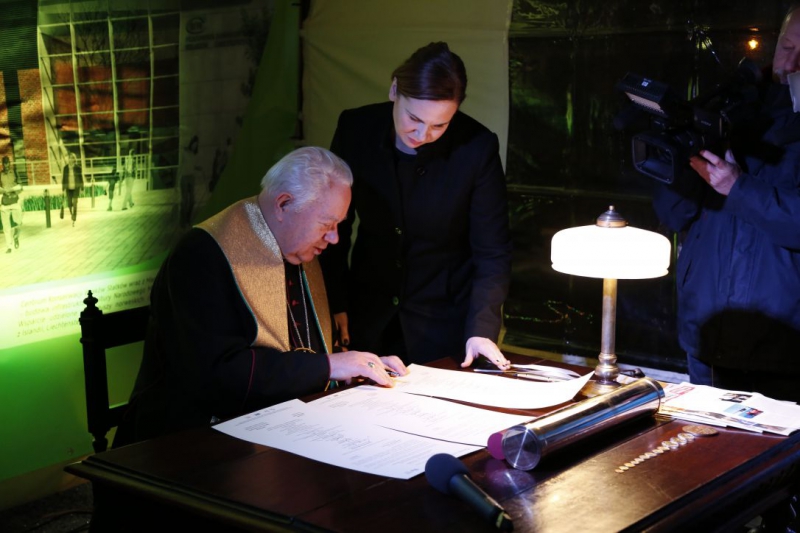 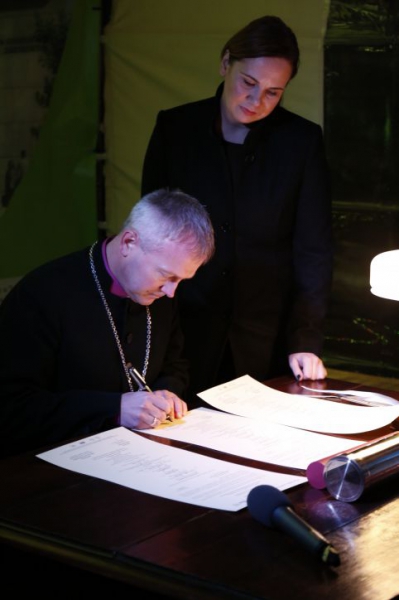 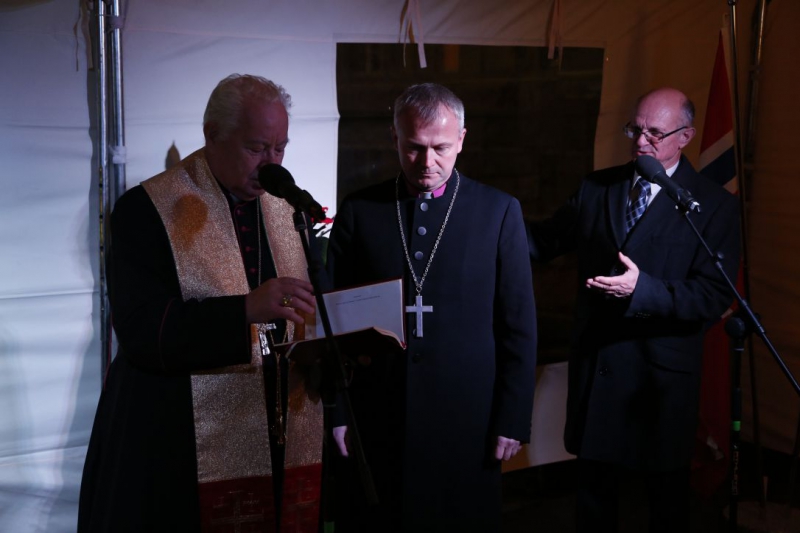 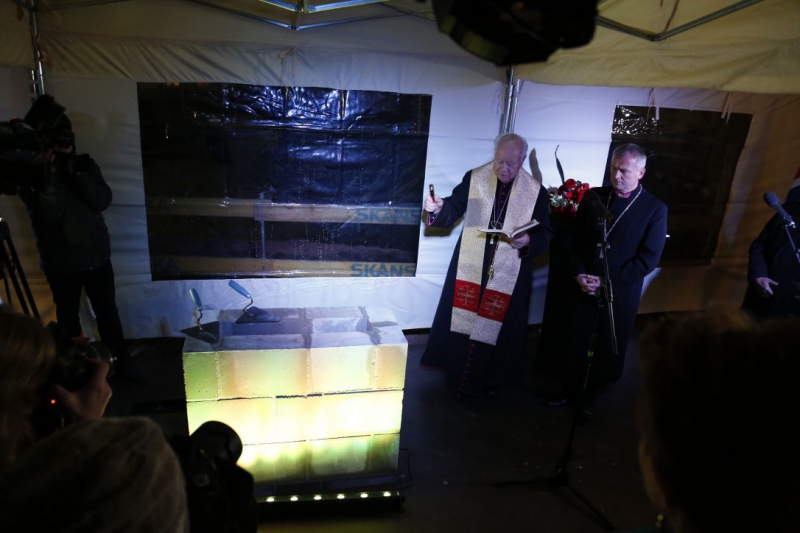 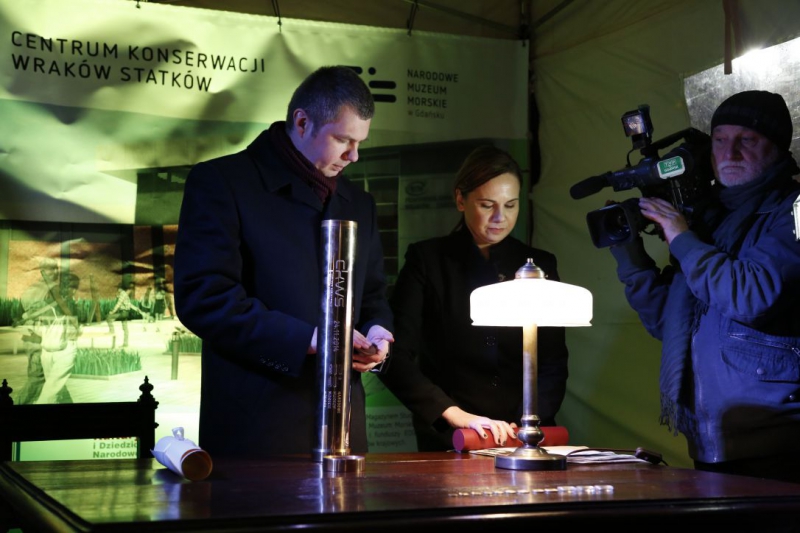 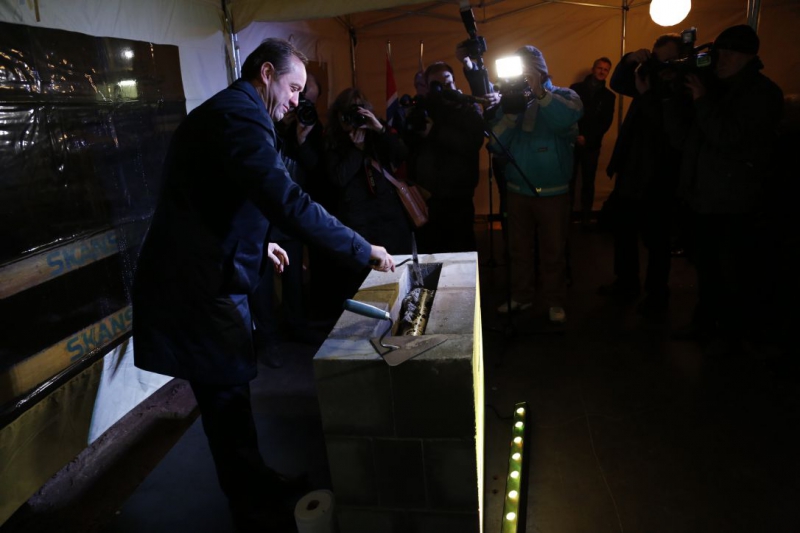 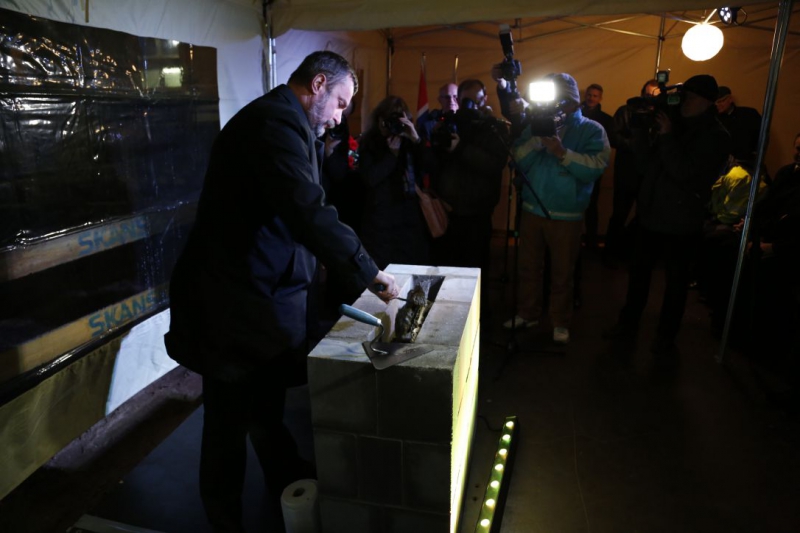 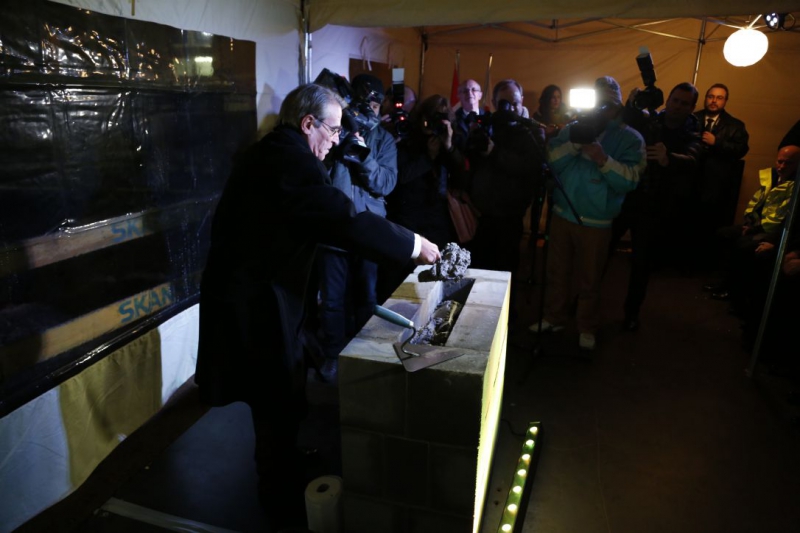 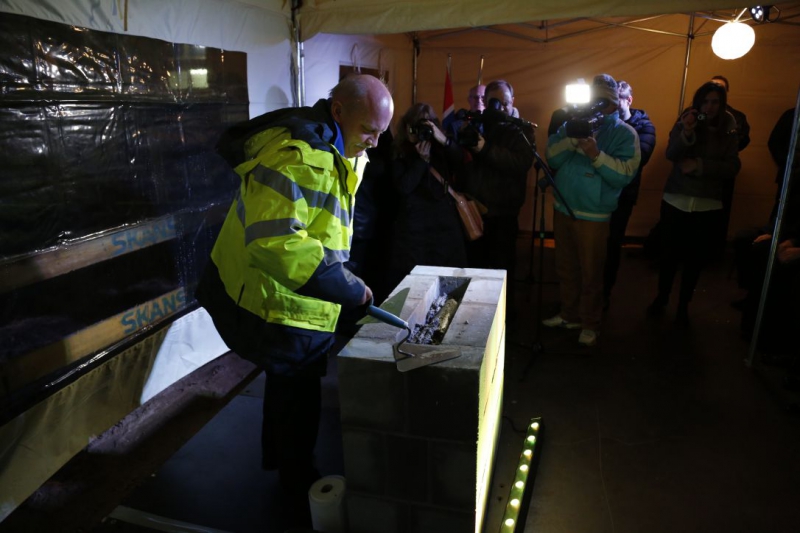 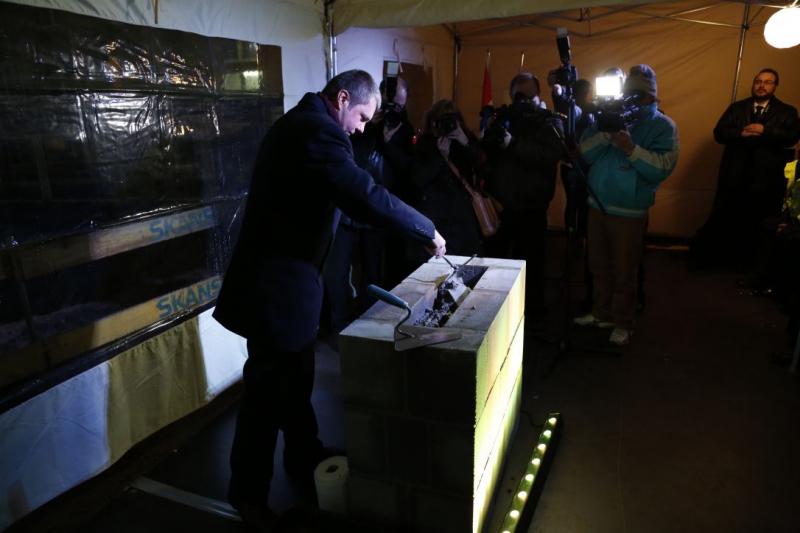 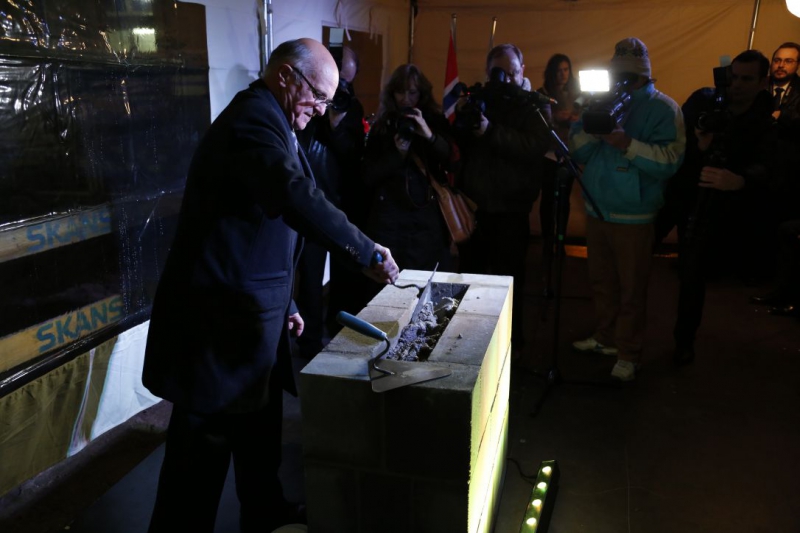 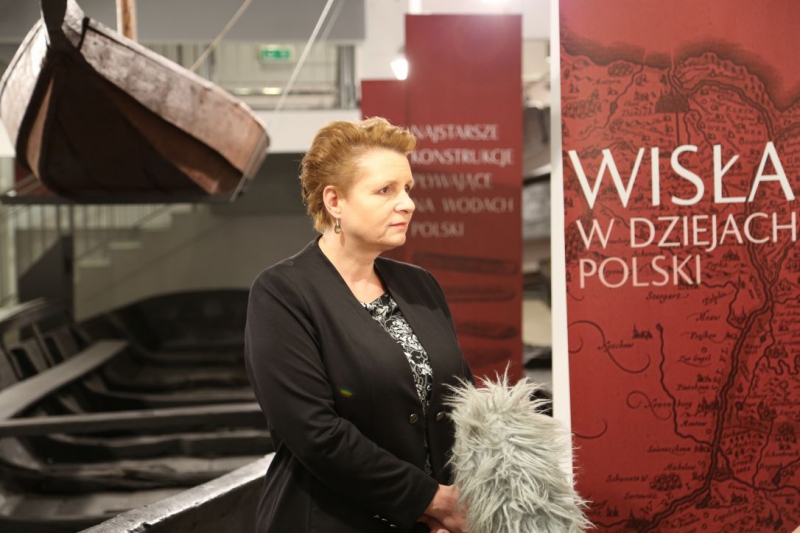