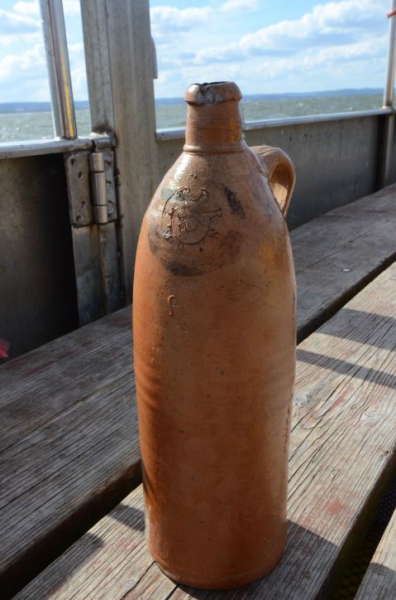 Gin in the bottle

At the beginning of September the J.S. Hamilton laboratory from Gdynia presented the final results of the analysis of the bottle with Selters inscription. It has been excavated by the NMM archeologists during research works on the F35.31 wreckage, commonly known as “Głazik”.

Initially it has been assumed that the stoneware vessel had been used to storage soda produced near the town Selters in Germany since 1898 (although notes on its spring extend to the year 1000 a.d.). The lettered inscription, as well as the age of the bottle, seemed to support this thesis.

After further analysis and calculations experts from J.S. Hamilton came to the conclusion that the utensil had been used to store genever gin. Genever is a traditional beverage from the Netherlands and Flanders made from molasses and juniper berries. Gin found in the bottle from “Głazik” has been diluted due to the lack of tightness of the cork. Laboratory expert, dr Stanisław Kmieciak, stressed that the exceptional purity of the alcohol disqualified i.e. whisky or vodka. In addition, traces of juniper berry compounds have been found in the liquid. Taking all this under consideration, the conclusive statements as to the nature of the beverage could have been drawn out.

Experts from J.S. Hamilton laboratory add that the presence of the genever in the mineral water bottle is not at all unusual. That alcohol, used for the medical purposes, had been traditionally sold and preserved in similar stoneware vessels.

The research works conducted on the F53.31 shipwreck and the historic items extracted from this shipwreck are being conducted as a part of the “Inventory of wreck F53.14 and F53.31 from the Gulf of Gdańsk” project which is co-financed under the Programmes of the Minister of Culture and National Heritage.