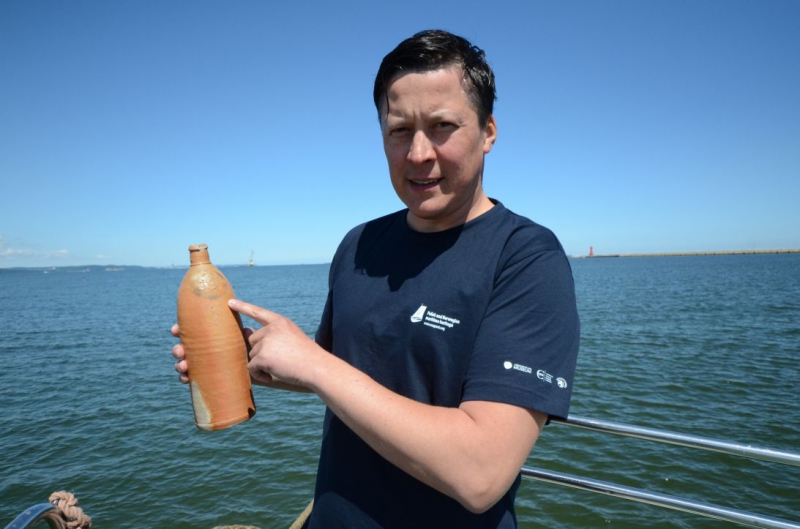 What does “Selters” bottle contain?

We have already received preliminary test results of the contents of the “Selters” stoneware bottle recovered in the course of archaeological underwater research works conducted in June on the F53.31 shipwreck, or the so-called Głazik (in Polish: a small rock).

Research works performed on the F53.31 shipwreck have been conducted by a team of underwater archaeologists and divers of the National Maritime Museum in Gdańsk, managed by Tomasz Bednarz.

In the course of these works, the team discovered a sealed stoneware bottle with the sign of “Selters”, a supplier of exclusive soda water from the Taunus Mountains area (Germany). The bottle containing approx. 1 litre of fluid was produced in Ransbach, a town situated 40 km from the springs of Selters water. The producer was identified by the letter R and the number 25 written below the main sing of “Selters HN”. In the period of 1806 – 1830 (when bottles of this type were produced), all small manufacturing plants in the Taunus Mountains area produced the total number of up to two million stoneware bottles.

A valuable discovery which dates back to the first decades of the 19th century has attracted considerable media attention. Articles about “Selters” water were published by Rzeczpospolita, Frankfurter Allemaigne Zeitung, Daily Telegraph, Frankfurter Neue Presse, Mittelbayerishe.de and Spiegel.de. Information regarding the discovery has also been covered by the Discovery programme, “Teleexpress” news programme and on a prestigious website archeology.org. The mayor of Niederselters (Hesse, Germany) who is also representing Selters Water Museumhas sent Tomasz Bednarz his congratulations accompanied with the newest edition of the book about Selters water.

At the beginning of July, the stoneware bottle with its contents has been submitted for tests to the J.S. Hamilton chemical laboratory in Gdynia. The purpose of the tests is determining if the bottle contains original mineral water or if the bottle was refilled.

After a few weeks, the laboratory has presented preliminary test results according to which the bottle contains a 14% alcohol distillate, most probably thinned with water. The chemical composition of the water corresponds to the composition of the 19th century Selters soda water. Further analysis will determine if the alcohol (presumably jenever or vodka) was really thinned with this water. Final test results of the J.S. Hamilton laboratory will be known at the beginning of September and will be announced at a press conference.

The research works conducted on the F53.31 shipwreck and the historic items extracted from this shipwreck are being conducted as a part of the “Inventory of wreck F53.14 and F53.31 from the Gulf of Gdańsk” project which is co-financed under the Programmes of the Minister of Culture and National Heritage.