Home>News>Archive>“Boats in Port” in our gallery 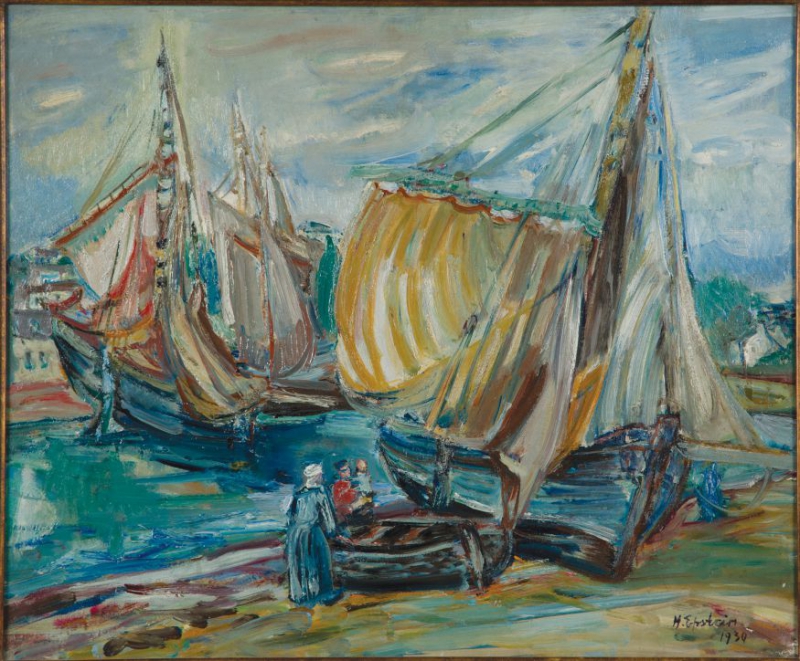 “Boats in Port” in our gallery

This August, collection of the National Maritime Museum in Gdańsk will be enriched by a new painting. The purchase of this work of art has been co-financed under the Programmes of the Minister of Culture and National Heritage. “Boats in Port” is an expressive landscape painted in bright, dynamic colours by Henryk Epstein.

Henryk (Chaim) Epstein was a Polish painter of Jewish origin. He was born in 1892 in Łódź and spent most of his professional life in France. Based on his style and professional surrounding, he is related to the famous École de Paris.

Epstein started to acquire his drawing and painting skills at a school offering education in Yiddish in Łódź, managed by Jakub Kacenbogen. He studied in Munich for a short while and then moved to Paris where he attended Académie de la Grande Chaumière. After World War I, Epstein joined the group of Paris avant-garde painters of the La Ruche residence (“Beehive”) in Montparnasse. At that time, the building was known for its cheap workshops rented mostly by artists from Central and Eastern Europe. This was the time when Epstein became friends with Amedeo Modigliani, Marc Chagall and Maurice Utrillo.

Starting 1921, Henryk Epstein held exhibitions at the Salon d’Automne (Autumn Salon) and the Salon des Indépendants (Salon of the Independent). In the late 20’s and early 30’s, the artist spent a lot of time in Brittany, in the vicinity of picturesque Quiberon and Concarneau. He was fond of painting local landscapes, people and fishing ports, as well as still lifes. A few years later, he bought a farm in Epérnon on Loire and moved permanently to the countryside with his family.

The exact date of Henryk Epstein’s death is unknown. However, it is known that he spent World War II in hiding at his farm until 24th February, 1944 when he was arrested by the Germans and taken to the Drancy internment camp and next to Auschwitz where he was murdered.

The painting “Łodzie w porcie” presents a part of a small fishermen’s village by a channel. In the foreground, there is a woman and a man with a child on his hands standing by one of the boats taken out of the water. On the opposite shore of the channel, there are other boats and houses with some greenery in the background. The painting is dominated by folds of beautiful sails. Bright, vivid colours with a predominance of sapphire and turquoise tones form a contrast with warm subdued yellows and dull reds. This contrast constitutes a characteristic feature of the painting. The colours are accompanied by strong brushstrokes which create an exceptionally expressive character, so common for the works by Epstein.