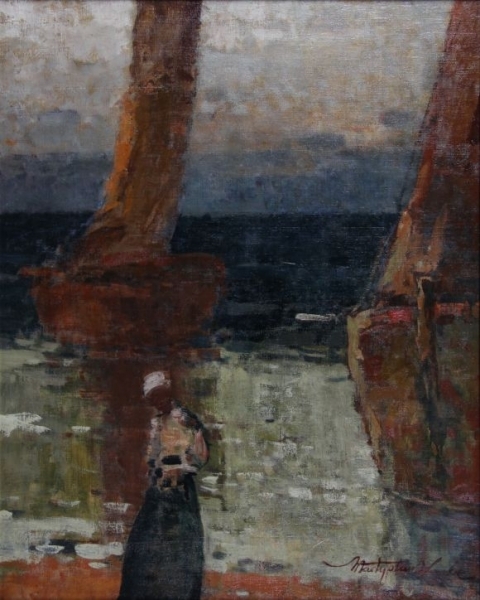 Collection of the Maritime Gallery situated in the Granaries on Ołowianka Island has been enriched with a unique work by Władysław Wankie, an apprentice of Gerson and Matejko. Purchase of the painting worth PLN 40,000 was possible due to the support of the Ministry of Culture and National Heritage. The official presentation of the painting was held on December 11th in the Maritime Culture Centre. Currently, it can be viewed in the Granaries on Ołowianka Island, in the Armoury Hall, where it will remain until the Maritime Gallery renovation is completed.

“Bretonki nad morzem” (“Bretagne Women by the Sea”) were inspired by the painter’s visit in Brittany which originated a separate direction in his works. The main motif are flat sandy beaches and fisherwomen working in Breton dresses. Wankie’s Breton paintings are rich in colour and light effects, they attract attention due to a unique framing method, Impressionist model of a seemingly incidental presentation of the motif, and also due to the indefinable atmosphere of silence and concentration which emphasises the harmonious relation between man and nature. His works can be characterized by their high artistic level and strong individual style.

Władysław Wankie (born in 1860 in Warsaw – died in 1925 in Warsaw) was a painter and an art critic. He worked in Munich and Warsaw. Wankie painted genre scenes, landscapes as well as symbolic paintings. He was a co-author of “Panorama of the Tatras”. An apprentice of Wojciech Gerson in Warsaw (1875-1880)and of Władysław Łuszczkiewicz and Jan Matejko in Kraków (1880). Lived in Munich in the period of 1882-1903. He was involved in the group of Polish painters gathered around Józef Brandt.

Wankie visited the Baltic coast in the second half of the 1880s. The visit made an influence on the change in subject matters and style of his works. In 1888, he supposedly became a good acquaintance of Aleksander Gierymski who influenced his growing interest in plein-air studies, advancing his sensitivity to colour and light effects observed in nature. Wankie visited Holland at the end of 1893 and the beginning of 1894, and also spent some time in Brittany, in a fishing settlement called Cancale by the Mont-St-Michel Bay. In 1903, the artist returned to the country and settled in Warsaw. In 1905, he became a member of the Society for the Encouragement of Fine Arts, he edited the art section of the Świat magazine in the period of 1906-1924, he also cooperated with Tygodnik Ilustrowany andKurier Warszawski. Wankie was one of the founders and for many years, the head of the Pro Arte Association.