Home>News>Archive>For Whom the Bell Tolled? 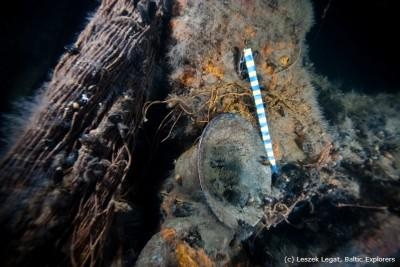 For Whom the Bell Tolled?

A wreck of a wooden sailing boat, discovered in May 2008, is lying at a depth of 64 m off the coast of Hel. When during the first expedition numerous pictures and films were shot, the site aroused interest of the Underwater Archaeology Department of the Polish Maritime Museum. A few expeditions to the shipwreck were organised in 2009. Unfortunately there were also a few ‘uncontrolled’ exploration trips taken to the wreck; as a result a steering wheel, portholes, and a few elements of rigging vanished, which was duly documented at the end of last year.

A comprehensive inventory of the wreck was planned for this year, so that proper identification of the vessel can be done. This task was carried out by divers from the Baltic Wrecks Society, under supervision of the Polish Maritime Museum.

The first descent to the shipwreck was in June. The effect of the expedition was stunning – the divers came across the ship’s bell in the vicinity of its mast. Since it was a very rare find, a decision was made to lift the artefact as soon as possible.

Procedures allowing a historical object to be salvaged from water are subject to strict regulations. The Museum received relevant permits from the Regional Monument Preservation Officer and the Maritime Office in Gdynia, and so its collection has been enriched by another unique exhibit.

Another expedition to the wreck is planned, as the divers hope to find some characteristic features that would enable the identification of the type and the age of the sunken ship. It is quite likely that it was a sailing steam craft. Perhaps it would be possible to confirm this vague, as yet, hypothesis…

In the meantime the 30 cm tall bell was transferred to the Conservation Department of the Museum. There is a chance that as it is being cleaned we will see the name of the craft.

Will it be possible to see the bell in the Polish Maritime Museum in Gdańsk? It will definitely find its place as a valuable exhibit of underwater archaeology not only in the Museum inventory of artefacts, but in one of the Museum exhibition halls as well – for visitors to see and admire.