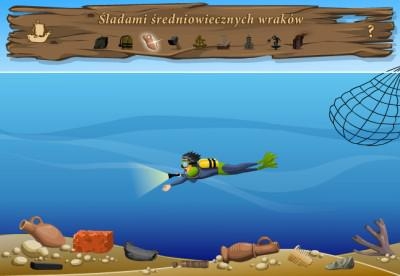 Welcome to the on-line exhibition ‘Following the Traces of Mediaeval Shipwrecks’, illustrating maritime archaeology in Norway and Poland. The exhibition is addressed mainly to young visitors, who can learn something more about our cultural heritage lying beneath the waves of the Baltic and the North Sea.

Both countries are linked by historical ties dating back to the Middle Ages. Sailing and maritime trade, dynamically developing over these water reservoirs, have left rich and diversified cultural seascape.

One of the most precious collections displayed at the Polish Maritime Museum in Gdańsk is the remnants of a mediaeval ‘holk’ type cargo vessel, raised from the bottom of the Gulf of Gdańsk in 1975-76. The first characteristic structures recognised at the archaeological excavation site were oval-shaped melted copper slabs, therefore this anonymous shipwreck was nick-named ‘copper ship’. More than 3 thousand artefacts were found on her board. The survival of these objects was possible thanks to the fire that broke out, covering much of the hull and cargo with melted tar. After setting, it turned into a fossil-like substance, a specific ‘time capsule’, which gave a unique testimony of mediaeval North-European trade.

An equally precious find is lying under a 1.5 m thick layer of silt at the Norwegian port of Avaldsnes. It is a well-preserved wreck of a late-mediaeval ship built in Gdańsk.

Avaldsnes had been a centre of power from the Bronze Age till Reformation in 1537. It was located in a highly strategic point at Karmsund, between Stavanger and Bergen. In the Middle Ages it was a navigation route, well protected from winds and waves, taken by most ships sailing to Bergen, and even to the furthest reaches of Northern Norway.

The new exhibition shows the two shipwrecks in their historical context, making the virtual visit more attractive through games and educational problems. Welcome to our exhibition at www.2wrecks.eu.