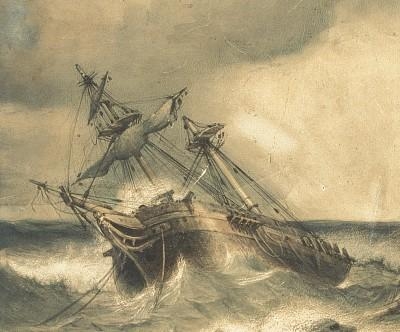 On 27 September 1785 a strong storm sank a British sailboat carrying iron near Dębki, a fishing village. A message about the sunken ship survived in the local fishermen’s stories. The memories revived whenever yet another net was destroyed by something lying on the sea bottom.

Michał Woźniewski, Ph.D. ichthyologist and diver, decided to verify the legend and looking around the places where the nets were destroyed he located the wreck. A CMM team consisting of archaeologists and divers was systematically working there for four consecutive summers, discovering many unique world-wide historical objects. The research established that the wreck is the remains of the General Carleton from Whitby (England), which sank in 1785. Detailed research and exploration yielded a lot of new nautical historical objects which provided a good starting point for broader studies on the history of sailing, ship building, history of culture and everyday life on the 18th century ships.

The finding of ordinary sailors’ clothes was of special importance. They provided a valuable source of information and enable reconstruction of the clothing which until recently was known only from scarce pictures. Discovery of the ship bell enabled identification of the vessel and reconstruction of her history and as a result, with all the collection of discovered objects, it enabled a better insight into the reality of one specific ship and her crew sailing on the Baltic Sea over two hundred years ago.

With funding from the Ministry of Culture and National Heritage it was possible to collect the results of many years’ effort of the CMM researchers and also other scientists exploring the wreck in one monograph on archaeological underwater research of a shipwreck in Poland. The beautifully illustrated book provides a comprehensive catalogue of the objects from the wreck.

General Carleton Shipwreck, 1785 edited by Waldemar Ossowski.
The book is available in the museum shops in Spichlerze (Granaries) on Ołowianka Island, on “Dar Pomorza” and also on the Internet.