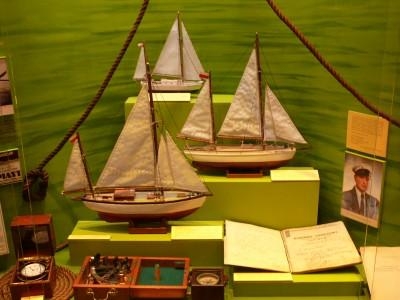 It is with great pleasure that we announce completion of our work aiming at updating the exhibition Polish Marine Activity in the years 1918-1945 which is now being shown within the framework of our permanent exhibition Poles on the Seas of the World. The Chairman of the Polish Senate Parliament Chamber, Mr Bogdan Borusewicz, has the honorary patronage of the exhibition.
The exhibition presents Poland’s marine history in the period between the two world wars. It also covers some political aspects, marine economy, shipbuilding, navy, marine education, water sports, and other marine issues.

Visiting the exhibition we learn how Polish sailors were fighting for independency in the period 1918-1920, the problems which Poland faced when it was returned access to the sea, numerous facts about establishment of the Polish navy and the Free City of Gdansk. Many historical objects, documents and pictures collected for the exhibition will give you a good insight into various economic projects of the newly independent Poland, into construction of the port and city of Gdynia, fishery development, including fishery on far seas, the history of water sports in the Free City of Gdansk. You will have an opportunity to listen to their stories about the Marine and River League, the Colonial League, the Atlantic routes of Polish sailors, cargo and passenger sailing, marine schools and museums, shipbuilding industry, Polish Navy and Merchant Marine Fleet.
During the exhibition you can listen to two songs composed by Feliks Nowowiejski – the Captain’s Tango and the Baltic Sea Hymn – and also you can see a film about the Polish Navy and far sea fishery during the period between the two world wars.
The new form and content of the exhibition is sure to please anyone who is interested in the marine history of Poland.

We encourage you to visit our exhibition which opens on 3rd April 2007 at Spichlerze on Ołowianka Island.