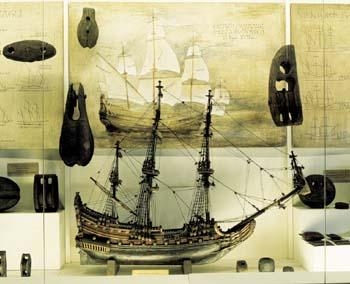 Poles on the Seas of the World

This is a historic, cross-section exhibition about Poland’s and Poles’ maritime history since the early Middle Ages until contemporary times. The exposition is richly documented with original objects found on the sea bottom during archaeological research under water. In the part presenting the oldest times you can see a river canoe from the 9th century, and a load from a 15th century trade ship named Miedziowiec (Copper Wreck), consisting of copper slices, iron ore, tar and beeswax.

In the part devoted to Poland’s battle to conquer Dominium Maris Baltici the exhibition is illustrated by the full equipment of the Swedish warship “Solen”, which went down during the Oliwa battle in 1627. You can see the personal belongings of crew members, kitchen utensils, Swedish coins and even reconstructed busts of the seamen.

In the other parts of the exhibition you will find models of warships – e.g. cross-sections of the Swedish Vasa and British Victory, and models of the legendary Polish transatlantic ships Piłsudski, Batory, Kościuszko and Chrobry, as well as a scale model of port and shipyard development, boatbuilder’s tools, boatswain’s tools and navigational instruments.

One of the most intriguing exhibition rooms is the Arsenal, in the original Gothic granary, featuring battle equipment from the Swedish “Solena” and Swedish, Polish and Russian cannons on carriages, surrounded by copies of Polish ensigns, knights’ armour and weaponry.